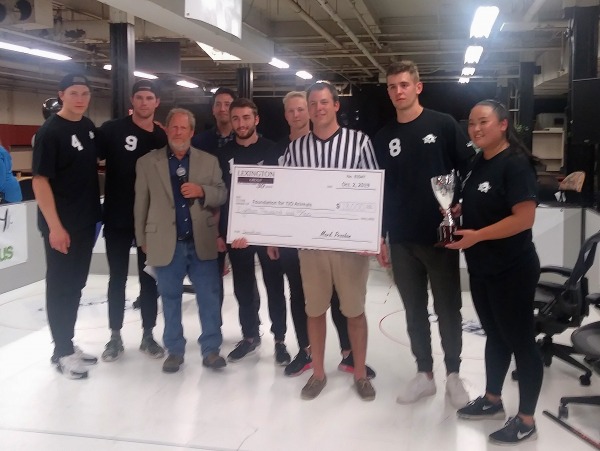 Lexington Group President Mark Proshan, Mayor Will Reichelt, and players from the Springfield Thunderbirds pose with a check for $18,000 that was raised to support the Foundation for TJO Animals.
Reminder Publishing photo by Sarah Heinonen

WEST SPRINGFIELD – Desks and conference tables were pushed to one side of the 300–foot long showroom of Lexington Group, an office furniture company in West Springfield. In the center of the room, a scaled–down hockey rink had been erected complete with penalty boxes adorned with signs reading “Doghouse.”

The players weren’t wearing skates, however. Instead, they slid across the hard, smooth, floor on Aeron–style office chairs in the inaugural Lexington Group Aeron–Chair Hockey Tournament to celebrate the company’s 30th anniversary and to benefit the Foundation for TJO Animals.

The foundation provides financial assistance and grants for veterinary care for the animals at the Thomas J. O’Connor Animal Control and Adoption Center, which serves the cities of Springfield, Holyoke, and Chicopee.

Lexington Group President Mark Proshan, who has previously held a seat on the board of the foundation said he wanted to do something different from a walk or charity run, “with the risk of this being an incredible success or complete disaster,” Proshan joked.

So what exactly is Aeron–Chair Hockey?

Similar to ice hockey in its format of three periods, two teams of four players and a goalie face off against each other, trying to hit the puck into the opposing team’s net. While some rules are familiar to ice hockey fans, such as no high–sticking, many regulations are specific to the sport.

Penalties can be instituted for not being fully seated, one–handed shots, tipping a player’s chair, kicking the puck and holding on to someone else’s chair, which the official rules describe as “widely regarded as a cheap stunt that trivializes a noble and legitimate sport.”

Proshan said Aeron–Chair Hockey has been “played all around the world but never around here.” Anastasia Ezequelle of the Lexington Group said the game was created as a promotion for Herman Miller’s Aeron–style office chair but has since become popular as a fundraising sport.

A team of volunteers from American International College (AIC) and the University of Massachusetts Amherst (UMASS) played against one another.

“I like activities, if it’s for dogs it’s even better,” said UMass’s Nick McGahan. An AIC team member echoed the sentiment, saying, “It’s a good way to help out the community.”

AIC won the first game with a score of 10–4 and went on to face a contingent from the Springfield Thunderbirds. AIC held their own, tying the game at 6–6 at the end of the second period, but the Thunderbirds pulled off a 10–7 win.

West Springfield Mayor Will Reichelt refereed the game while DJ Pat Kelly from Lazer 99.3 was on hand as the sportscaster for the game.

The event, which Proshan said took a couple of months to prepare, included a silent auction for a Thunderbirds Jersey, a light fixture from Lexington Group, a massage, cookies, and 9 of the Aeron chairs that were used in the game.

Kelvin Molina–Brantley, executive director of the Foundation for TJO Animals said that community events “provide the foundation with support for the medical care of all the animals.”

Pam Peebles, director of TJO Animal Control and Adoption Center introduced Foxy, a chihuahua who had recently had surgery on both of her front legs.

At the end of the event, Proshan awarded the Thunderbirds players with a trophy and presented a check for 18,000 to the foundation.

“It really takes a village to take these animals from when they walk in the door of TJO to when they’re ready for adoption,” said Peebles.