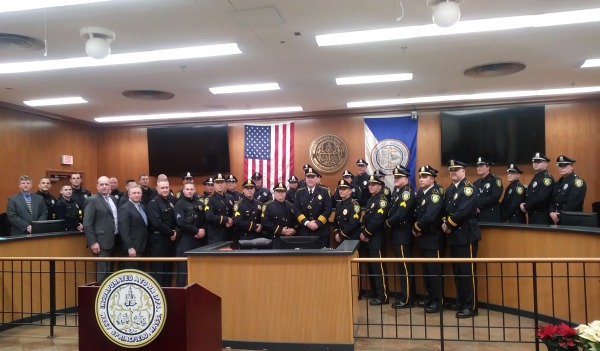 WEST SPRINGFIELD – It was standing-room only in the council chambers of the J. Edward Christian Municipal Office Building on Jan. 2 with police officers, dignitaries, friends and family as Paul Connor took the oath of office to become the next chief of police for West Springfield.

Dozens of officers ringed the front of the room behind the council seats, while the front rows of the audience were filled with Connor’s family, town councilors and School Committee members. Hampden County Sheriff Nick Cocchi, state Rep. Michael Finn, District Attorney Anthony Gulluni were in attendance, as were former Police Chiefs Thomas Burke and Tom Fitzgerald and Interim Police Chief Robert Duffy.

“It’s overwhelming and it’s an honor,” said Connor, a 23-year veteran of the police department. He said he never imagined he would one day be the chief.

Mayor Will Reichelt said Connor was “excellent” for the post, in part because Connor is a product of West Springfield.

Connor, in turn, said he appreciates the mayor’s support of not only himself, but of the entire department.

Among the people Connor thanked in his speech was Duffy, who has served as interim chief since May 2018. Duffy received a standing ovation from the crowd.

“This is not a job that one person can be successful at by himself,” Connor said, touting the team of officers and officials he has at his disposal.

“Being around great men and women of law enforcement drove me to this career,” Connor said. He grew up in a law-enforcement family and his father, Sgt. Jerry Connor, served on the force in West Side for 42 years. During his speech, Connor noted that this was the first pinning without his father present, having died last year.

Connor joked that if his father were there, he would say, “‘What the hell are you doing?’”

One of Connor’s goals as chief, he said, is to “make the officers of the West Springfield Police Department proud.” Connor laid out his guiding philosophy going forward as chief.

“If you do the right thing and you treat people as fairly as you can, there is nothing anybody can ask of you,” Connor said, receiving a standing ovation at the end of his speech.