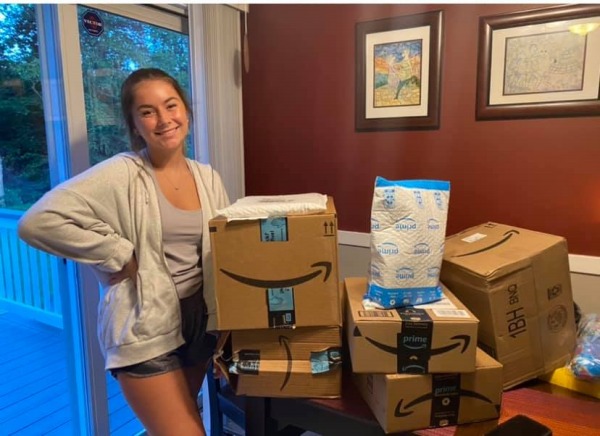 WEST SPRINGFIELD/HOLYOKE  –  Kaydn McDonough lives and attends school in West Springfield, but has a special place in her heart for the city of Holyoke.

The West Springfield High School senior said she previously lived in Holyoke, where a large part of her family still lives today. Additionally, she said a large number of her family serve the Holyoke Public Schools in some capacity, with quite a few being employed as teachers in the district.

McDonough said when the 2019-2020 school year was abruptly ended due to the coronavirus, she began experiencing “a lot of stress and anxiety.” This, she said, led her to begin thinking of how younger children were impacted by the closure of schools. “I was kind of thinking about how younger kids might be feeling during this time,” she said.

After coming up with the idea, she created a Facebook page for the cause and started to get the word out. She said she spent the summer gathering materials for the bags, which are geared towards children from kindergarten age to fourth grade.

She said soon after coming up with the idea, she began an Amazon Wish list for anyone who wished to donate supplies towards the cause. She said while she’d received donations mostly from family members, there were also community members who had found the Facebook page and ordered donations for the bags.

The bags, which McDonough began delivering on Sept. 8 to children in Holyoke schools, included school supplies such as a notebook, folder, pencils, pens, crayons and books. However, she said there were also fun supplies included such as a stress ball, jump rope and snacks.

She said 20 bags were distributed to children in the first round of deliveries, however she said they still had “a lot more to give out,” which she said she and her mother were “still working on.” McDonough added that at the moment the bags operate on a first come, first serve basis, and the pair was “trying to put everything together as fast as possible so no one has to wait.”

When asked how she identified children to give the bags to, she said people who had heard about the cause had reached out to her or her mother via Facebook to say they had a child who’d enjoy a bag. This, she said, increased when her mom shared the page to a local Facebook forum for Holyoke.

“My mom shared my Facebook page on Hello Holyoke and people were commenting and [said] ‘I have a son,’ or ‘I have a daughter,’” she said. “[They] then would private message my mom or my Facebook page, and give the address.”

McDonough said while she would continue to distribute the bags, she also had ideas for Halloween bags as well. “I also have another idea for Halloween and holidays since kids won’t be able to trick or treat this year, I might give out bags of candy,” she said. Additionally, she said she had the idea to get presents for children around Christmastime, but nothing was definitive yet.

In the meantime, McDonough said she is accepting donations from the Amazon Wish list she created and donations of candy. She said she doesn’t have a specific list of candies she is requesting, but will happily accept donations of what “people will have or can buy.”