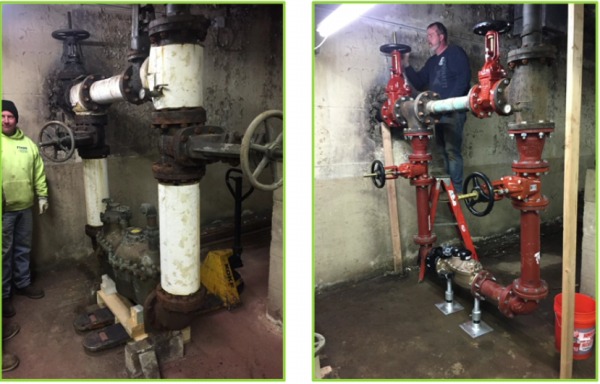 Before and after photos of a commercial water meter replacement.
Photo Credit: Channel 15 Public Access

WEST SPRINGFIELD – Zach Chornyak, a project manager from Tighe and Bond, and Robert Colson, director of the Department of Public Works presented the West Springfield Town Council with an update during the Nov. 6 meeting on the water and sewer projects that were approved in late 2018.

“We’ve taken some infrastructure that was not really even maintainable and we’ve made it so it’s running like a top,” Colson said.

Town Attorney Kate O’Brien said the state revolving funds are low-interest loans from the state to be paid back at a later date out of the town’s water and sewer enterprise funds. The combined $16.8 million for the projects had previously been appropriated and is part of the reason the sewer rates were raised.

The first drinking water project was a water pressure zone improvement for the area of Birnie Avenue, Piper Road and Morgan Road. Ludlow Construction, which did the work on the project, installed new water mains, new pressure reducing valves, pumping station upgrades and new booster pumping stations. The expected end date for this project is in spring 2020.

The benefits, Chornyak said, are increased pressure–flow; better fire flow, which is the flow of water available from hydrants; and more serviceability.

This project may not be hooked up this year due a to conflicting pike Highway work schedule. As Chornyak explained, the highway departments paving of the pike will limit traffic flow and therefore no other work in the area is allowed.

The second DWSRF project was the replacement of 3,500 water meters, nearly 40 percent of all meters in the town. The expected end date for this project is also spring of 2020.

The new meters will record accurate usage and more accurate revenue for the town. Councilor Sean Powers asked about how much was being used that was unaccounted for.

“We don’t have the exact number,” Chornyak said. “Meters that are older, that hadn’t been replaced in the last 10 years, was the focus of the ones we wanted to replace because the way meters fail they don’t fail in favor of billing more usage or metering more usage they fail in the opposite way.”

The first of the clean water projects addressed the “infiltration and inflow” of rainwater and groundwater into the sewer system.

The problem with rainwater and groundwater going into the sewer is that it is all pumped to Bondi Island and the town is charged by volume for its treatment there.

The work, which was done by Caracas Construction, was focused on the areas of town with the worst infrastructure, mainly the Memorial Avenue corridor and surrounding areas. The work done included the removal of rainwater and groundwater from the system, new drainage piping, lining sewer pipes, removing cross connections and installing new catch basins.

The second of the clean water projects were improvements to seven existing pumping stations. Colson told the council that the stations required structural and architectural repairs, as well as electrical repairs to complete the upgrades. The work was done by Baystate Regional Contractors.

The last of the Clean Water projects were improvements to the sewer pumping stations at Riverdale Street, Bridge Street and Agawam Avenue. They required complete rebuilds of the mechanical, electrical, HVAC systems and structural repairs.

The Paucatuck Brook station is being completely removed and replaced by a low-pressure sewer station with residential grinder pumps. Chornyak said the residential pumps will “keep maintenance down.” WM Schultz Construction is expected to be done with the project by early 2020.

Councilor Nathan Bech asked if people man the pumping stations every day. Chornyak said that while they are mostly automated, workers must tend to the system a couple of times each day to make sure it is running correctly.

“The entire system was on the verge of collapse,” Councilor Daniel O’Brien said of when he toured the stations before work began.

“It forms along the inside of the pipe, an entirely new pipe,” Colson explained. The center on the material is later cut out robotically, he said. Colson said it is a much less invasive process than digging the old pipe up and replacing it.

Councilor Michael Eger asked if the lining has the same structural integrity as the exterior pipe if crushed, which Colson said it does. He also said the lining is warrantied for one year, the same as a plastic pipe.

Kelly was interested in the schedule for work to be done on the “hundred-year-old” pipes in town.

“It’s a pretty big project to do a whole town over. It’s a lifetime of work, two lifetimes for some people. It took us this long to get them installed, it’s going to take at least that long again to repair them,” Colson answered. “There’s over a hundred miles of pipe in town,” he added. “We did 1,300 feet in the last two days. We got a ways to go.”

Bech asked if the pipes around Coburn could be prioritized.

“I’d hate to build a new school and have it get flooded because a sewer line collapsed,” said Bech.

Colson said that was part of the reason they wanted to get the work on Garden Street completed. He said the pipes on Southworth Street were in fairly good shape.

Kelly wanted to know if the work had lowered the rate of stormwater being treated as sewage. Chornyak said they don't know yet but the infrastructure issues had been addressed, so they believed it had. The councilor asked for the figures when they become available.

Colson cautioned that other areas of town hadn’t yet been addressed so the infiltration and inflow had only been taken care of in most dire sections. He said work on the other areas is required under agreements for sewer treatment and that they have just tackled the first area.

“There’s four or five other phases we have to go through just like this one we just completed, that was started in 2010,” Colson explained.

One of the problems that Colson identified as contributing to infiltration and inflow was residents venting their sump pumps into the sewer, a practice Colson called “forbidden.”

Kelly suggested sending out a letter to let the public know that practice is not allowed.

Moving on to other topics, the Community Preservation Committee and Parks and Recreation Department proposed the purchase of a small parcel of land at 465 Morgan Rd. for the price of $50,000. The land would be used as part of the Centralized Active Recreation and Education Space (CARES) program.

Victoria Connor, director of Parks and Recreation said the goal would be to connect the “old Elks building,” and pavilion with West Springfield Middle School and High School. The 4.93 Acres of property currently owned by KSB Realty would facilitate that connection. It will also create more space for athletic fields.

“I’m very excited about this project,” Councilor Brian Griffin said. “The need for athletic complexes has our community has been a focal point,” of his conversations with residents, he said, adding that the existing fields were lacking.

Bech was also supportive of the project.

“This is not money that is going to come out of schools or police or fire or a budget or free cash for the most part anyway,” said Bech. “This is money that is specifically designed for exactly this kind of thing.”

Eger asked the assessed value of the land, which the town attorney said would need to be calculated since the purchase would subdivide a single parcel.

“The tax should be minimal,” she said, since the part the town wanted was only a small portion of an otherwise residential property.

Eger considered the residential property tax rate that the attorney had previously estimated at $19 and gauged that the loss of tax revenue would be between $900 and $1,000 per year. The 2019 tax rate listed on the town’s website is $16.96.

When the council voted, Eger was the only no vote. Powers abstained due to a conflict of interest.