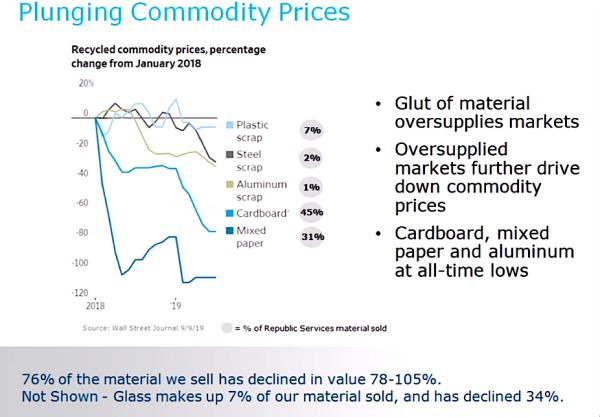 WEST SPRINGFIELD – The West Springfield Town Council voted at its meeting on Feb. 3 to indefinitely suspend the 30 percent sewer fee increase that had been scheduled for July 1. The rate hike would have been the third such increase in the past couple of years.

Griffin said, in a conversation he had with Mayor William Reichelt, it was noted that enough funds had been raised for the immediate improvements and to “build out the plan” from there.

Councilor Daniel O’Brien said the current rate of $5.65 per cubic-foot, “brings us to where we should have been had it been incrementally increased over the years,” and, “a further increase would be punitive.”

Dan Higgins, of waste disposal company Republic Services, urged the town to limit contaminants in recycling to lower the cost of processing.

“The important thing for all of us is that we keep all recyclables as clean as possible,” Higgins said. He explained that China has drastically reduced the level of acceptable contamination in the recyclable material it is willing to buy, from 3 percent to .5 percent.

Republic Services has launched an education campaign at recyclingsimplified.com to help its customers understand the rules and realities of recycling. For example, it explained that pizza boxes cannot be recycled despite being cardboard, because the grease and cheese on the box made them ineligible. It also noted that one contaminated article can contaminate an entire bin of recyclables. Higgins said the two biggest contaminates in recyclables are food and plastic bags, as the bags jam the equipment.

“We’re collecting things that may no longer have a market to sell them,” said Higgins. He said everything costs to recycle, except metals and cardboard, which can still be sold for a small profit. In most parts of the state, he said, the processing of recycling will cost more than the disposal.

“Long-term for this country, we have to build infrastructure,” to process the material domestically, said Higgins.

“What we can do going forward is keep it clean – if there’s contaminants in it, that’s a bigger financial hardship for the town,” said Higgins.

On a related topic, a five-year solid waste disposal contract with Community Eco Power was approved by the council. O’Brien noted that the new contract was an increase of $93,600 or 19.4 percent.

“These are things we have to go up on. We don’t have a lot of room to fool around with something like this,” O’Brien reminded the other councilors that the increase in the contract will affect what can be accomplished in other areas budget.

A motion was put forward to place a conservation restriction on the roughly 1,465-acre Bear Hole land spanning West Springfield and Holyoke. The restriction would allow the state to oversee the land. Councilor Sean Powers said there had been debate around the issue and “the public showed up with some great questions.” O’Brien said he had voted against the measure in sub-committee.

“It’s based on the fact that a rogue mayor will come in and develop Bear Hole. I believe there are political solutions to that,” O’Brien said, adding, “I do not feel comfortable seating control to the state.”

Councilor Edward Sullivan objected with a proposal to take no action and the decision was held over to the next meeting for further vetting.

A motion was made to allow the council president to spend money on bills, drafts, and payrolls, as long as the council is made aware of the action at the next meeting.

Councilor Anthony DiStefano said, “I accept as an elected responsibility to be able to see what I’m agreeing to pay for and sign without having it presented to me after I forfeited the ability to allow the president to do that.” He also said to Griffin, “I don’t think you should be put in that place.” The motion was approved, despite a no vote from DiStefano and Sullivan.

Griffin said a natural hazard mitigation plan has been drafted in conjunction with the Pioneer Valley Planning Commission and that a draft plan is available for viewing on the town’s website.