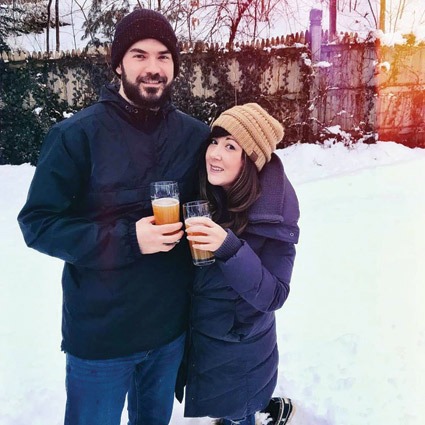 Mark Avery (left) pictured with his wife Meghan (right). Mark hopes to turn his dream of opening a brewery in West Springfield into a reality late this summer. The brewery will be called Two Weeks Notice.
Reminder Publications submitted photo.

WEST SPRINGFIELD –  A new brewery is coming to town.

On Mar. 15, Two Weeks Notice Brewing Company announced on Facebook they’re planning to open a brewery in West Side. Because the former homebrew operation is still pending licensing approval, the exact location of the future brewery cannot yet be disclosed. However, Two Weeks Notice Founder Mark Avery said he’s looking forward to opening day, which is expected to be late this summer.

“I’m excited to just watch people enjoy it, that’s the whole reason why I started doing it,” he said. “My favorite part about when I brew beer is giving it to my wife or friend and having them drink it and say, ‘this is so good.’ That’s what I want to do with the general public.”

Two Weeks Notice had previously planned to open in Westfield with a one barrel system. However, in August 2017, the plans for the location fell through after Avery experienced a falling out with his previous business partner. He told Reminder Publications the brewery has re-grouped and will be moving forward with plans for a three barrel facility in West Springfield.

The beer-expert said his vision for the brewery is to reflect a laid back atmosphere, with hanging art displays and spray-painted walls. The taproom will feature communal tables, where customers can order pints to stay or packs of beer to go.

“What makes a good brewery is the ambience of the whole place, so the cool thing about our space is  it’s a little gritty which is kind of what we’re going for,” said Avery. “We don’t want the taproom to be pretentious. There will be communal tables to strike up a conversation with someone you’ve never met before. Those are my favorite type of taprooms – where you can go and meet somebody you’ve never met and become friends by the time you leave.”

Avery started drinking beer at a young age, but it wasn’t until he turned 23 he decided to experiment with flavor. He began drinking Sierra Nevada and other beers he hadn’t tried before. One day, he was watching a show on the history channel that chronicled the history of brewing. He said it “blew” his mind and inspired him to join the business.

His first experiences as a brewer began in his home, where he would brew beer for his wife and peers to taste.

The process of brewing beer at home isn’t an easy one.

Avery steeps his grains, throws in malt extracts, ferments the “wort” solution and adds yeast. The fermentation process can take around two weeks, explained Avery, before it’s time to bottle the beer.

The Two Weeks Notice owner began putting his skills to the test by entering local beer competitions. After multiple successes, he made the leap to commit to opening his own brewery.

Avery said he hopes to use his brewery to give back to the community once it’s up and running.

“I want to make it a cool place for the community where they can be happy and proud about it, because some breweries get bad reputations depending on what type of brewery they are and the crowd they draw in,” he said. “We don’t want to affect the people around us in a negative way. I’m big into giving back as well, so I’m hoping we can do charity events where certain percentages of the profits go back into whatever we want to give back to.”