West Side celebrates refugees and international citizens with new mural 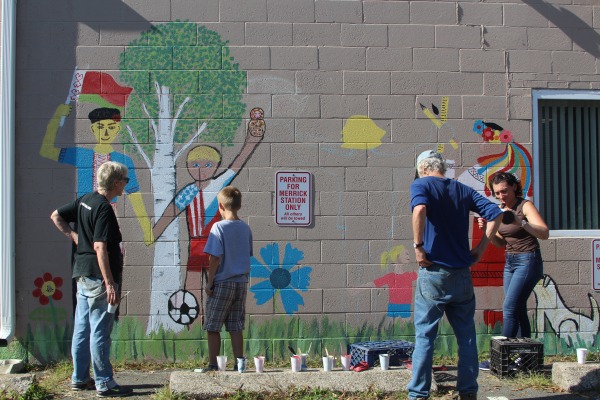 A group of international-citizen volunteers gathered at the Merrick Station in West Springfield to paint a mural representing the town’s diversity.
Reminder Publishing photo by Jordan Houston.

WEST SPRINGFIELD – West Springfield is celebrating its diversity in a colorful way. Over Columbus Day weekend,  a group of international-citizen volunteers gathered at Merrick Station to paint a mural celebrating West Side’s refugee and international community.

The mural – which was organized and underwritten by the West Springfield Office of Community Development – was painted on the side of Merrick Station at 389 Main St. in an effort to represent and reflect the different backgrounds of West Side. Robert Markey, a local artist who has worked globally with refugee communities, facilitated the painting of the mural.

“I was real excited about being able to work with refugees,” said Markey. “I didn’t know how it was going to turn out and how many people would show up – but it’s been wonderful. So many people have come and it’s been a real treat for me to be able to do this. I’m hoping this will be the beginning of more projects here.”

The mural features a number of human silhouettes, each of which represents the volunteer who painted it. The volunteer artists were then given the freedom to decorate the silhouettes however they pleased – many of which added characteristics representative of their home countries.

Markey said he was inspired to do the human silhouettes because the shape is more manageable for all skill-sets.

“In terms of drawing portraits, it’s difficult for people who are not quote-on-quote artists,” he explained. “So, I had this idea that if they just work in pairs and one person stands there and the other person outlines them in chalk – then the outline is there, and the hard part of the perspective and everything is there.”

“Then they can paint themselves however they want – traditional clothes, colors, abstract – and that’s how it happened. It’s amazing to see the different styles. It’s not just a mural, it’s about them. I am just so moved that it worked so well,” he continued.

A number of citizen artists contributed, and families working with the Refugee Resource Center were also invited to participate. All levels of experience were welcome to join in the beautification process.

Merrick is a neighborhood in the southeast corner of West Springfield.

Morgan Drewniany, director of community development, explained that, although the neighborhood is seen locally as a destination for international supermarkets and restaurants, a lot of residents feel disconnected.

“We have a beautiful community made up of folks with a range of backgrounds, but nothing in the Merrick neighborhood that celebrates this in an outright way,” she said in a statement. “It struck me when I began in this role that the Town hadn’t lead a project to celebrate our refugee community, one of the largest in the state. This is just the beginning of creating neighborhood pride to this regard.”

The Office of Community Development falls under the umbrella of the Town’s Department of Planning and Development and aims to provide decent housing, a suitable living environment, and expand economic opportunities for low-and-moderate-income residents.