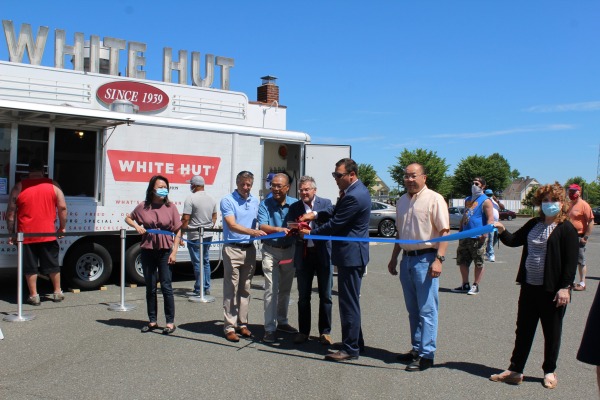 WEST SPRINGFIELD –  Months after the doors to White Hut in West Springfield closed abruptly, a White Hut food truck was debuted in the restaurant’s original location at 280 Memorial Ave.

The food truck is owned and managed by Andy Yee and Peter Picknelly, who bought the restaurant from Edward?“E.J.” Barkett, whose grandfather opened White Hut in 1939. Both Picknelly and Yee said they’d been going to the restaurant with their families for years and were excited to be a part of reopening the restaurant.  “The sign says it, it says 1939. It’s a landmark and I’ve been coming here for 40-years myself. No, not another one,” Yee said.

Yee and Picknelly first contacted Barkett after the restaurant announced the abrupt closure in February. “When I heard the news, as we all heard the news that this was shuttered and closing abruptly, that it was kind of like losing a family pet,” Yee said.

The pair, who Yee explained, “have a canny act of bringing landmark brands back,” started their partnership years ago by reopening The Student Prince in Springfield when it was in danger of closing its doors for good.

“So when we saw this kind of shutter, Peter and I got on the phone. I said, ‘Hey we can’t have this thing close, lets get involved,’” Yee said. “Peter’s friendly with EJ Barkett, the former owners. So we chatted and chatted and chatted, and here we are today, June 18.”

Yee told Reminder Publishing that the pair hoped to keep the essence of White Hut alive, first, by re-hiring Art?White, responsible for cooking the burgers.

“[We’re] also thrilled that White accepted our employment invitation to come back and work with us, he’s been here 42 years. So he’s the lead guy here, he’s the guy,” Yee said.

The food truck, which Yee referred to as “phase one of two phases of reopening”, made its debut on June 18. The food truck, which will be open from 11 a.m. to 4 p.m. Monday through Friday, had a steady line of customers before 11 a.m., and the line continued to grow as the afternoon went on.

Yee said the plan, at the moment, is to open the restaurant sometime in the middle of July. “We’ll fix her up, and make her shine, and modernize her, new equipment,” he said. “It’s just going to be exciting for the next 81-82 years.”

Picknelly said that while the equipment will be upgraded and modernized, the restaurant would still maintain ownership and use the original grill. Additionally, he said the pair planned to expand on the family friendly atmosphere already established at the restaurant and planned to add a walk-up ice cream window.

Yee said they are still “navigating” if the food truck will remain open on Saturdays and what they will look like. “So we’ll figure that out until we open up bricks and mortar,” he said.

“We’re going to work out our final plans with the building department and we’ll get the final approvals from them, and we’ll do another ribbon cutting,” he said.