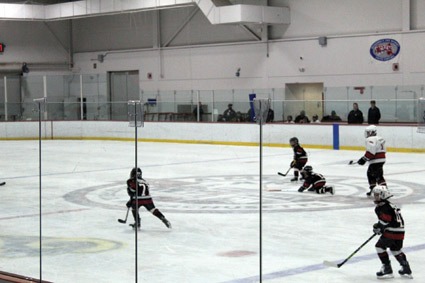 WESTFIELD – Amelia Park Arena is ready for the hockey season with a new concession stand, new strategies and plenty of events planned for the season with its 20th anniversary on the horizon.

Dan French, the arena’s general manager, said that this year was a rebuilding year.

“All new staffing, all new training, implementing new protocols -- we’ve been completely overhauling our management software and doing a lot of work on the operations,” he said.

French said they brought in the best in the industry “so we can have the best ice in Massachusetts, period.”

So far parents seem happy with the changes to the arena, and that starts with the reopening of the concession stand. George Semanie Jr., a father of one of the youth players from out of town said he was happy to see the stand open.

“It’s really nice to see the concessions open, it’s good that parents can get a coffee when their kids come to play early,” he said.

In addition to the new concessions stand, parents are happy with the changes to the arena as well. A.J. Kuhn, whose son plays for one of the youth teams, said he thinks the change in management has been a good one so far.

“The ice looks better, the locker rooms are much cleaner, overall it is a much better experience for parent and skater,” he said, adding that there has been a dramatic change in the arena since last season.

The rink also offers a Learn to Skate program every Tuesday morning, Thursday morning and Saturday afternoon. French said the program is under the U.S. Figure Skating umbrella.

French said a litany of hockey teams play in the arena. From the 20 youth teams, the two high school teams, and Westfield State’s varsity and club teams, the rink is busy throughout the hockey season.

In addition to the hockey teams, the arena is trying to open its doors to the public as much as possible.

“We’re trying to find opportunities to open the ice up to the public and make it as accessible and affordable as possible, that’s a major mission here,” French said.

French added that while the arena staff is planning various events for the 20th anniversary at Amelia Park, nothing is final but they will be announcing more in the fall.