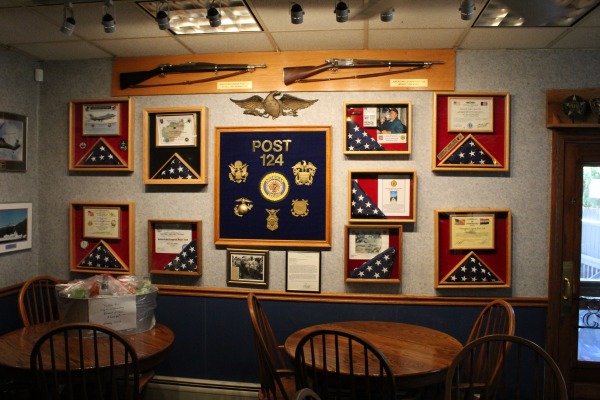 WESTFIELD – This year American Legion Post 124 in Westfield celebrated its 100th anniversary with a steak roast back in early August.

Unlike other military organizations, everyone in the American Legion holds the same rank, regardless of what rank they achieved during their service careers.

Barry Plumley, a Korean War veteran who joined the American Legion in 1956, reflected on what it means to be a member of the post. During his time with the Legion, Plumley served as Post 124’s commander  in 2017 and 29 years as part of its honor guard.

He explained that one of his favorite parts about Post 124 is its member activity and a willingness to participate in events when the Post is called upon. Throughout the year, the Post presents events for the Holyoke Soldier’s Home and Shriners Hospital. From casino nights to supporting causes like the March of Dimes, Plumley said the Legion does their best to get involved in the local community.

While Plumley does not participate directly with the Honor Guard these days, he said he still likes to be a part of the festivities whenever he can. “If they have a vehicle that is going to be in the parade and they ask me to ride in the vehicle I always say yes,” he said.

This past weekend, Post 124’s Honor Guard participated in a Color Guard contest down in Indianapolis, IN, and came in first place at the competition. Among the participants was former Legion commander Cindy LaCoste, a U.S. Navy veteran and the first female commander in the history of Post 124.

Being a part of the Legion today is still something LaCoste loves to do. “I want to keep our love of our country strong and by participating in the Legion and getting the message out to our communities, I feel that I am giving back,” she said.

“I am humbled to be part of something they created out of an idea to take care of the sick and wounded, the widows and the children of those that made the ultimate sacrifice,” LaCoste explained.

Despite being the first female commander, she said that she wanted to use that position to push the post’s story rather than her own. “I would always turn the conversation back to our team and our mission. I always used the attention to further our story, not my story,” she said.

LaCoste then explained one of the reasons she was happy about being the first female commander meant that Post 124 stood out more as a result. She added she was happy with seeing more female members at the post. She said, “I am very happy that women are getting involved because we do bring a different perspective to any job.”

Current commander Gary Fontaine, a U.S. Navy veteran, said the addition of the Legion Riders last year is one way the Post is hoping to add some youth to its organization. “One thing we want to do right now is to get a younger generation in here from the Iraqi War, Afghan War, and all the wars. Try to get them in here to make the place better,” he said.

Now the Legion is trying to bring more money into the Post and keep up their current traditions, Fontaine explained.

He said his mission is to, “give back to the veterans and make sure that we have a Legion for future veterans, for all ages and for family.”

Next month Post 124 will be holding an open house on Sept. 28 from twelve to two where veterans and their families can check out the post and see if they would like to become members.