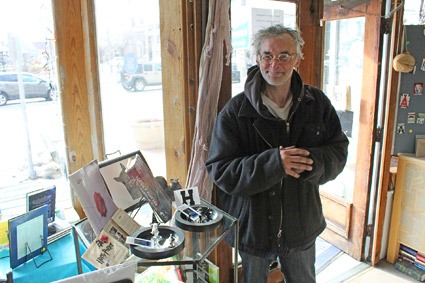 WESTFIELD – Between an auction that ended on Jan. 25 and other events in the works, Blue Umbrella Books is starting to turn the corner in its effort to keep its downtown Westfield store open.

Russell Atwood, Blue Umbrella’s owner, said he was happy with the turnout for the auction.

“People did come and respond to the auction and bought things as well. I think half the things got bid on and I think some people are gonna walk away with some great deals and other people bid nicely because they knew we needed the money,” he said.

While Atwood was still counting up the final bids for the auction, he said that there were several items that sold for over $100. He said that the three largest bids were $199 for a Vincent Price painting, $120 for a Harry Potter prize package, and a1949 hardcover edition of Punch Magazine that sold for $100.

He explained that the idea for the auction initially formed after the store had a slow Christmas season.

“We didn’t really have that great of a Christmas and I had a lot of items to sell. They were gathering dust, we were in trouble and I had to move them, so I thought the best thing to do was make an event out of it,” he said.

To close out the auction on Saturday, Hugh Naggar, a local glass artist, was in the store creating glass sculptures for sale, including a set of matching heart earrings and a necklace for sale for Valentine’s Day. Atwood added that he also created the glass sculptures for a Harry Potter set as part of the auction and is hoping to work with Naggar again.

He said, “The last day with Hugh Naggar was really nice because a lot of people come in and watch him do his stuff. We may do more with that as well and maybe have him come in on a weekday.”

He added that they may team up again in the future to host a seminar to teach glass sculpting at the store.

In addition to different events in the store, Atwood said that he’s trying to raise money through his own writing as well.

“I’ve been doing more writing,” he said, “I wrote an article that I just sold to Alfred Hitchcock’s Mystery Magazine and I’m working on a new novel which I’m hoping to sell as fast as possible.”

Atwood explained that if push came to shove, the store would move locations and not close its doors for good. He said, “It’s not that we’re necessarily going to close as much as we might have to relocate to another place in Westfield with lower rent, we don’t want to do that.”

He added that he is looking for new ideas and suggestions to keep the business going.

“I’m open to any ideas, if there’s anybody who wants to partner up with us, I’m in,” he explained.

Along with different events, Atwood said that the store is starting to grow its customer base to healthy levels.

“Just this morning I had a couple come in and spend $70 on books and our customer base is definitely growing. We just need a few more nice days,” he said.

“If nothing else, I think the auction bought us a little time to keep doing what we’re doing and that’s all I can ask. I’m cautiously optimistic,” Atwood added.