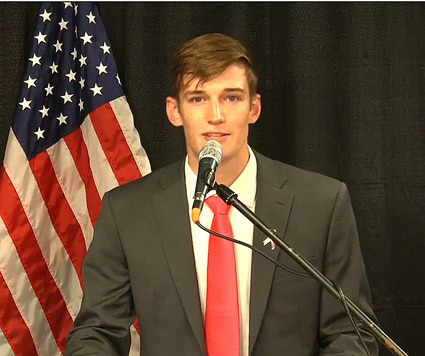 The forum again gave Republican Kelly Pease, Independent Ethan Flaherty, and Democrat Matt Garlo a chance to give their stances on the election’s biggest issues. Each candidate was given a set of questions, with 60 seconds to respond to each, in addition to a two minute opening and two minute closing statement.

For one of the questions, each candidate was asked how they felt about the mandated vaccinations for students, particularly the new flu shot mandate.

Pease started the responses to this round of questions and said parents should have a choice when it comes to vaccines.

“I believe that parents should have a choice, especially when it comes to the flu vaccine. I’m concerned with anything that’s mandated especially if it’s not proven to be totally effective. I agree with the chicken pox vaccine and things that have eliminated diseases completely,” he said.

While he said he was in favor of medical and religious exemptions, Garlo said the mandate was necessary because of the uncertainty of a second wave of COVID-19 in the winter.

“We have to understand that 2020, this school year, this era of COVID, is unlike anything anyone has experienced. The governor is already preparing to expand hospital capacities this winter when coupling COVID and the flu together. It still includes religious and medical based exemptions, so I see this as a community-based solution and we don’t have to overwhelm our hospitals and those concerned can still opt out,” he said.

One of the biggest concerns Flaherty said he had was the fact that the flu shot is required for students and not staff.

“If the flu shot mandate was about public health then why is it required for the students and not the staff who make up a large part of the school and are typically higher risk? I think we should be weary of mandating medical decisions in order to receive education, and only ever consider it if it’s really made with public safety in mind,” he said.

During the forum, each candidate was also asked about how they felt about gun control, specifically in regard to banning suppressors and gun free zones.

Garlo answered first and said there are more important issues in Massachusetts than additional gun legislation.

“I believe enforcing the laws on the books in Massachusetts is more than acceptable at this time. We’re a leader at gun safety and training. At this time, I don’t see those issues as a priority, I see budget season and Westfield’s fair share as our priority,” he said.”

Before supporting any legislation on gun free zones and bans on suppressors for guns, Flaherty said the legislation had to be sure it would actually help lower gun crime.

“When it comes to suppressors and gun free zones, I think it’s most important to look if that actually has an effect on gun crime or if it’s just another, however well intentioned, burden for gun owners. I think the most important thing to consider is whether or not a law will have a real effect on gun crime and how much it infringes on our right to own these tools,” he said.

Pease said that he was against any further restrictions on legal gun ownership but would support legislating illegal gun use.

“It is important to understand that you cannot legislate morality. Adding more gun control laws is not going to stop criminals from getting guns illegally. Legal gun owners abide by the laws. There’s a reason why it’s the Second Amendment, I do not believe there should be any further laws that restrict legal gun ownership,” he said.

For the final question of the night, each candidate was asked what they thought was the most important currently pending piece of legislation and what their stances were on each.

Flaherty began the final round of answers and said passing the budget and the COVID response are most important now.

“Right now, the only critical piece of legislation is related to the FY21 budget and COVID. Going forward I would like to see an annual budget process that gives cities and towns firm budget numbers by the end of March each year. Doing this isn’t easy but with the right laws there are ways to do this,” he said.

One of the bills that Pease said stands out to him currently is the one to reform police standards which he said he was against.

“I think they tried to rush something through too fast and with the qualified immunity for the police, you’re going to lose a lot of good police officers. I think these bills go too far to the detriment of our officers putting their lives on the line every day,” he said.

Garlo said the most important piece of legislation was getting Westfield its fair share for education, water, and roads as part of the FY22 budget was more important than anything.

“My strong opinion here is if anything is of greater importance to anyone here than making sure Westfield gets its fair share in the upcoming budget, then that’s a problem in itself. I will not be writing my dream bills upon getting there because I will be working on the fiscal year 2022 budget,” e said.

With the final forum out of the way, all three candidates return to the campaign trail ahead of the election on Nov. 3.