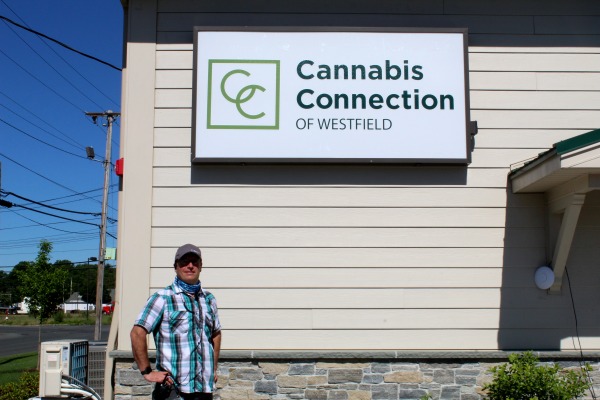 Tom Keenan, Cannabis Connection’s chief executive officer, said he was happy to finally be able to open for curbside pickup after a long approval process.

“It feels amazing, it’s a lot of work, a lot of 12-hour days or longer. But it’s just nice to actually have some money going in instead of going out all the time. It’s a refreshing feeling,” he said.

Currently Cannabis Connection is only taking online orders through its website, ccofwestfield.com. Keenan said, “Right now, we’re doing 15-minute time slots and there can be 10 people in each time slot. Depending on how busy we are the order may be ready immediately, but we have a 15-minute delay between when you place an order and when you pick it up.”

When guests arrive, they enter the parking lot through the second entrance, wait in their cars and then drive around to the opposite side where there are three stations designated for pickup before exiting the parking lot.

He said that while the first couple of days were busy, he was expecting a big turnout for the opening weekend. “We started with 100 people on the first day, and then we went up to 180 and 190 and that was during the week. Today we’re expecting a little bit more and then over the weekend we’ll see.”

Keenan added that he was thankful for his staff and the effort they have put in so far. “We’ve got a great staff, and everybody has been learning all of the roles, and getting better and more proficient at everything. It was kind of nice to have a slow start so everybody could get their feet wet,” he said.

He explained that the store currently does not offer any kind of discounts on its products and all buyers must be over the age of 21 per Massachusetts State Laws.

“We’re prohibited from giving any discounts, so we can’t do veteran or medicinal discounts, the state won’t allow us to do that,” he said.

Keenan added he has no plans currently to become a medicinal dispensary.

He said, “It’s pretty much the same products, we just have dosage limits. It’s a lot more involved process to become a medicinal. You would have to be all on-site and we don’t have the capability or room her to cultivate or process stuff.”

In addition to the current curbside pickup model, Keenan said he has a plan allow customers to come inside but he is still working on the best way to combine both models.

“The first thing was to get curbside up and running and now we’re trying to focus on how we can safely get people that want to come into the store and give them access without endangering anybody,” he said. “It’s kind of a balancing act and we want to figure it out and get a solid plan before we jump into it.”

Keenan said he is encouraging anyone interested in trying Cannabis Connection’s product should test out their current curbside pickup system.

He said, “We’re inviting everybody to come on down and try out the curbside. We are trying to respond to everybody that sends emails and Facebook messages, there’s just a few of us that are able to respond so we’ll get to them as soon as possible.”