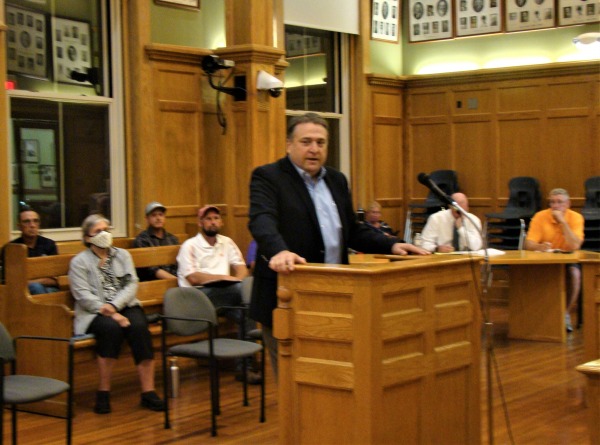 WESTFIELD – The city is “an ideal location” for a massive data center complex, developers said last week, despite attempts by Connecticut to lure it away with tax breaks.

The City Council and Planning Board will host a public hearing on the project at 6 p.m. on Sept. 16 in the council chambers on the second floor of City Hall, 59 Court St., Westfield.

Developers have agreements to acquire 15 parcels from 10 different owners on 155 acres of land at 199 Servistar Industrial Way, 90 acres of which are developable. They plan to build 10 data center buildings over 12 to 18 years.

Westfield resident Jeff Daley, president and CEO of WestMass Area Development and former economic development officer for the city, was joined by Paul Corey of Servistar Realties and Jane Mantolesky of Fitzgerald Attorneys-at-Law in East Longmeadow to discuss the project with the Planning Board on Sept. 7.

Corey said the company is under pressure to secure permits for the project, as Connecticut plans to offer significant 30-year property tax and sales tax incentives to attract a data center there.

“I’ve never seen anything like this to pass the Legislature,” said Corey, a Connecticut resident, adding that the incentives are putting pressure on Servistar’s time frame. “It’s critical to get through local approvals on an aggressive timeline,” he said.

Servistar Realties, which Corey said is an expert in energy, has been looking for a location for the past two years in Connecticut, Massachusetts and Rhode Island, calling it a “complicated process.” He said they focused on Westfield a year ago as the “ideal location.”

Daley, who grew up on the north side, said he is aware of concerns about truck traffic there, but is “happy” about the project as a resident and former city official.

“This is an appropriate project for the north side of the city,” he said, thanking Mayor Donald F. Humason Jr., Community Development Director Peter J. Miller and his team.

This would be the first project of its kind in the area — a large facility full of computer servers, providing offsite or “cloud” data storage for computers connected to the Internet.

“The cost of energy in New England is primarily why you don’t have a project like this yet,” Corey said, adding that the market for data centers is one of the best in the U.S., accelerated by changes in use of technology during the COVID-19 pandemic, as well as a tremendous expected demand from autonomous vehicles, which are heavily data-intensive.

Critical factors in picking a site included energy costs, long-term favorable property tax policy, sales and use taxes, a favorable regulatory environment and support of local and state officials for the industry, he said.

Among the reasons Westfield was chosen are new $36 million Eversource 115kV dual high voltage transmission lines running through the property. He said reliable electricity is critical.

He also cited Westfield’s proximity to a robust fiber network, with access to undersea cables, and its central geographic location in a dense population center, which he said brings data closer to the user. The city having its own airport, and short drives to commercial air service at Bradley and Logan airports, were also a factor.

Mantolesky said the data center campus will pay substantial property taxes, averaging $8.5 million over a 40-year term, with an annual payment in lieu of taxes average of $11 million after full build-out. She said there would be more than $350 million in direct tax payments over 40 years.

Other project benefits include 400 full-time jobs at the site with an average annual salary of $100,000, plus 1,200 indirect jobs such as engineers, architects, support and supply, and 1,800 construction jobs over an 18-month construction period for each building.

The project will be phased in over 12 to 18 years, with the first data center building, plus accessory building and substation, to be completed in two or three years.

Mantolesky said a key consideration is a 121A/6A property tax agreement with Westfield, and long-term sales and use tax incentives. Chapter 121A of state law authorizes incentives for the creation of industrial projects in areas considered to be blighted open space or substandard.

The team said the property where the project is located is a very difficult area to develop, as much of the property is undevelopable wetlands. They said several projects looking at the area failed to develop there, but called this project well-suited for it. They said the MGM casino in Springfield has a similar 121A agreement.

Following this week’s public hearing, the Planning Board will issue a report as to whether the project meets 121A requirements. The City Council will then vote on the 121A/6A agreement after reviewing the report and send it to the mayor to approve and forward to the Housing Board.