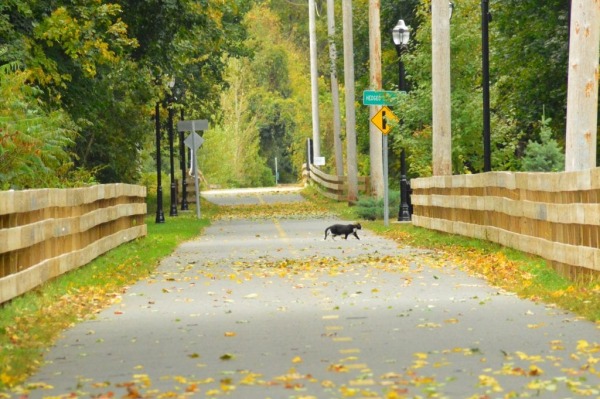 The Columbia Greenway Rail Trail is located where the former canals ran through Westfield.
Reminder Publishing Photo by Peter Currier.

WESTFIELD – The Pioneer Valley Planning Committee is spearheading an effort to put the Hampshire and Hampden Canal on the National Register of Historic Places (NRHP).

The Hampshire and Hampden Canal is the Massachusetts section of what was once an 86-mile-long 19th century canal that spanned from Northampton to New Haven, CT. The Connecticut portion of the canal has already been added to the NRHP.

The Columbia Greenway Rail Trail, the portion of the former canal that runs through Westfield, is still unfinished, though an important piece of the trail is set to be completed in April. The trail also runs through Southwick to the Connecticut line.

The Massachusetts portion of the canal ran from Northampton through Easthampton, Southampton, Westfield, and Southwick before crossing the state border. Westfield Historical Commission Chair Cindy Gaylord said that there is an effort to get all five Massachusetts towns to put up money to have the length of the canal archeologically surveyed.

“We will be presenting at the Community Preservation Committee meeting in April. I will be bringing someone from the Pioneer Valley Planning Committee to speak,” said Gaylord.

She said that each community will be asked to contribute between $10,000-12,000 for the surveying project. The canal’s purpose was to allow boats to travel inland through a series of 28 “locks” that would account for the rise of elevation from New Haven to Northampton.

Ground broke for the Canal on July 4, 1825 and it was fully completed in 1835. Due to financial difficulties on the part of the canal’s owners, the entire route was converted into a railroad in 1847. The railroad company would also go on to become bankrupt, and most of the length of the canal-turned-railroad was converted into a bicycle path that still runs from Northampton to New Haven. Some of the path has yet to be completed.

The National Register of Historic Places is run by the National Park Service (NPS). It is a list of places, structures, or objects that the NPS has deemed worthy of continued preservation.