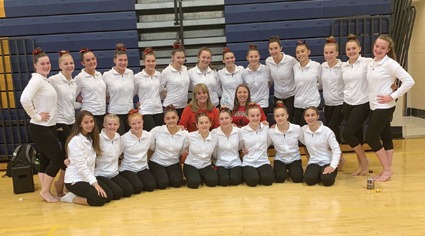 WESTFIELD – The Westfield High School gymnastics team saw the return of its former coach who continued her 10-year undefeated streak in the Pioneer Valley Interscholastic Athletic Conference (PVAIC) on Sept. 19.

Joanne Hewins made her return to the team for the first time in six years in September after the former coach had left the post. The team’s first meet under the helm of Hewins was last Thursday against Agawam and Chicopee Comprehensive High School. WHS won the meet with a score of 130.85, bringing the WHS season record to 2-0. These meets typically have three teams facing off against eachother, and the winner gets two wins added to their record, the 2nd place gets a 1-1 record, while 3rd place falls to 0-2.

Hewins said that she is proud of the victory, and that she expects the scores to improve as the season goes on.

“I see them really doing well. We started our competitive season later than other sports, but it takes so long to get their routines down. For our first meet, we started really strong.” said Hewins.

She added that her goal for this season is to get meet scores of around 136. The scores are calculated by two judges for every event who rate each routine out of 10. The final score is the average scores given by the two judges added up across every gymnastics routine.

Hewins had been the WHS coach from 1994 to 2013, when she left the position. In total, she has been coaching gymnastics for about 44 years. She started her coaching career as a volunteer in summer camps.She returned to WHS to coach, understanding that the entire program may have folded if WHS was without one.

“I am assuming it would have probably folded if they didn’t have a coach.” said Hewins, “If that happened, the PVAIC gymnastics program would have folded, as they would have only had four teams.”

She felt comfortable coming back to coach as well, as many of the girls on the WHS team are also a part of the private team she coaches.

The next WHS tri-meet is on Sept. 27 at WHS. Hewitt’s team will be facing Chicopee Comp and Hampshire Regional High School. Hewitt hopes to keep her undefeated streak all the way to the Western Mass PVAIC championships on Nov. 8.