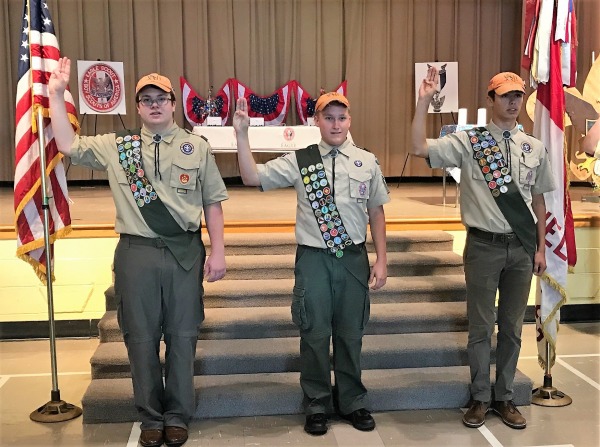 James Gaudreau, Nicolas Stathatos and Enders Houck, all of Westfield Boy Scout Troop 821, achieved the rank of Eagle Scout and were honored with a ceremony and reception Aug. 24 at Blessed Sacrament Parish.

Assistant Scoutmaster Joe Mitchell served as Master of Ceremonies for the event and said earning the rank was “the epitome of scouting.”

Most scouts do not earn the rank of Eagle, the highest level of Boy Scouting.

According to scouting.org, the rank of Eagle Scout has existed since 1912 and is considered “a milestone of accomplishment – perhaps without equal – that is recognized across the country and even the world. Those who have earned the Eagle Scout rank count it among their most treasured achievements. ‘Eagle Scout’ is not just an award; it is a state of being. Those who earned it as youth continue to earn it every day as adults. That is why an Eagle Scout is an Eagle Scout – not was.”

“This award is a performance-based achievement,” he said. “Not everyone who joins scouting earns the rank. You must demonstrate achievement, leadership, service and outdoor skills.”

Gaudreau said “There’s a lot of work that goes into an Eagle Scout project, but even more work to make an Eagle Scout” before thanking those who helped him achieve the rank. He said his father Rick was particularly encouraging. Gaudreau’s advice to younger scouts hoping to become an Eagle was “start now.”