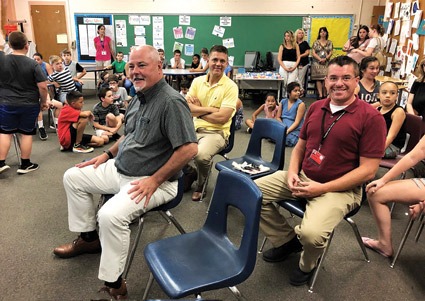 The House approved the bill on Oct. 23, which Velis said was “a great day for public K-12 education in Massachusetts.” The Student Opportunity Act invests an unprecedented $1.5 billion in K-12 public education and significantly helps school districts that serve high percentages of low-income students by increasing the low-income increment to 100 percent. The bill received unanimous House support and was previously approved by the Senate.

“The Student Opportunity Act transforms the way we fund K-12 education here in the commonwealth,” Velis said. “In many ways this was the most consequential bill I have voted on in my close to five years as a state Representative.”

Velis cited the many different aspects of this bill that he said will have “profound effects” on education for the next several years.

“The passage of the Student Opportunity Act has the potential to help Westfield Public Schools further meet the needs of our special education, English language learners, and economically disadvantaged students,” he said. “It is refreshing to see the state finally attempting to make up for some of the unfunded mandates implemented over the last decade and update the education aid formula to cities and towns, which hadn't been updated since 1993.”

Massachusetts Teacher Association President Merrie Najimy said the passage of the Student Opportunity Act by the House was a “huge victory for our students.”

Najimy stated in a press release that this was cause for celebration.
“The new funding will mean smaller class sizes, more enrichment programs and electives, an increase in  guidance services, more classroom aides, improved programs for English learners and special education students and greater ability for districts to foster caring, effective, innovative schools,” Najimy stated.

“The bottom line is that this is a day to celebrate,” she continued. “Unionized educators, parents, students and local officials all came together to craft a vision for public education and then relentlessly fought for it — by writing, calling, marching, letting the public and the Legislature know that a quarter-century after the creation of our modern education funding system, public education funding had fallen shamefully behind, disproportionately impacting communities of color.”