It’s all about timing when it comes to maple syrup 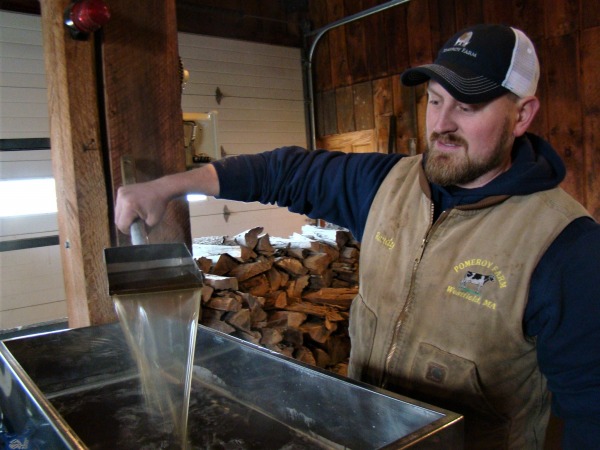 Randy Pomeroy of Pomeroy Dairy in Westfield stirs the first boil of syrup for 2020. He thinks they will have a good maple syrup season this year.
Reminder Publishing photo by Amy Porter

WESTERN MASS. – When we have a winter like this one, with open ground in February, people start talking about climate change and worrying whether we’ll have a good maple syrup season this year.  But for maple syrup farmers, it’s all about timing.

Randy Pomeroy of Pomeroy Dairy said he tapped on Feb. 1 this year.  Pomeroy and his sister, Rachel Pomeroy Monahan, are the fourth generation to run the farm at 479 Russellville Rd. in Westfield.

“We went through and tapped everything,” Pomeroy said.  He said he has a big crew of family and friends, who tapped all 1,000 to 1,200 taps in one day.

“This is the earliest I have ever tapped in before,” Pomeroy said, adding that he’s been doing it his whole life.

Pomeroy thinks they will have a good maple syrup season this year. “We had plenty of rainfall last fall and the fall before, and the trees aren’t stressed at all,” he said, commenting on all the acorns that were around last fall.

Pomeroy said it’s a gamble on when you do tap, because you only have a six-week window until the tree heals up.

“If it does run good later in the season, in March and April, you’re out of luck,” he said. “The sap won’t be running if it gets too cold. It if stays cold, the sap will stay down in the root,” he said.  A cold weekend is ok, though, and this year he said the sap was flowing in the middle to the end of January. For the next six weeks, he’ll be looking for days warm enough to get the sap running.

“It is running well,” he said, adding that he boiled on Feb. 4 and 5 after tapping.  “It’s nice and light.  The lighter it is, the sweeter it is. Later in the season it’s darker, and has a more maple flavor,” he said.

Normally, Pomeroy produces 150 gallons a year, although he said in the last few years he lost a few sugar maples where houses went in, or landowners logged them out.

Pomeroy Dairy’s main business is a dairy farm.  Last spring, their dairy barn burnt down, and they lost five calves in the fire. Currently, they are housing their 100 cows at Dream Meadows Farm up the road. “We’re still able to milk, thanks to the farmer up the street,” he said.  The milk is for the cheese curds and yogurt which his sister makes, and are for sale at the farm,” he said.

First thing in the spring, Pomeroy plans to rebuild the barn. “I’m being optimistic for this year. You have to be, to be a farmer,” he said.

Leon Ripley, owner of Maple Corner Farm at 794 Beech Hill Rd. in Granville, planned to tap on Feb. 12 this year.

“Hard to tell,” Ripley said about the forecast for the maple syrup season. He said they tapped at this time last year, but didn’t get enough sap for the first boil until March 15.  The two years prior, they tapped in the first week of March.

Maple Corner Farm puts in 4,000 taps, and normally makes over 1,200 gallons of maple syrup.  In addition to selling the syrup, they make candy, cream and granulated sugar. Ripley said they have been doing this on the farm since 1835.

Ripley said they have an eight week season, and sugar about four weeks of it. “You have to have a fairly warm day to run sap, from 39 to 45 degrees. It can happen in different time frames,” he said, adding that years ago, they always tapped on Washington’s Birthday.

“We expect to have a good year.  It’s been a warmer February than last year,” Ripley said.

He said another factor is that Maple Corner Farm is higher up - at 1,500 feet - than downtown Westfield, and when the valley gets rain, they get ice. On Feb. 6, they had an ice storm and lost power for several hours.

Maple Corner Farm also runs cross-country trails. This year, they haven’t had enough snow, except for one week in December, and one week in January.

Regardless of the weather, Maple Corner Farm’s Pancake House will open with supplies on hand on Saturdays and Sundays beginning Feb. 15, from 8 a.m. to 2 p.m. serving a full breakfast of pancakes, French toast, bacon, sausage and eggs. Ripley said they can seat 99 people in the lodge.

“It’s not ideal, I don’t think, but it’s the way it is now, you just never know,” he said.?He then added, “It’s the up and down of the temperature that’s going to make the sap flow.”

Boisseau has been tapping trees since he was a “youngster,” he said, and puts out 1,400 taps, producing 150 to 200 gallons a year.?He started his sugar house in 2005 and sells just maple syrup.

For Boisseau, who works full-time at Northampton Rental, the maple syrup business is a side project.  He said he boils before and after work during the season.

Boisseau doesn’t mind having no snow when he goes out to tap. “The blessing on that end is I don’t have to use snowshoes,” he said.

Further up on Goss Hill Road near the Chester line, Henry Sarafin of HJS Enterprises, Boisseau’s nephew, is also waiting to tap. Sarafin said he has a small sugar house with 100 taps on a 19 x 48 lot.

“Not yet, I’m going to hold off a little longer. I think it’s going to cool off at least one more time before sugaring season,” Sarafin said.

This upcoming season is Sarafin’s seventh, having started when he was 12-years-old. Now 19, Sarafin graduated from Smith Vocational and Agricultural High School in the class of 2018 in forestry. He said since he got out of high school, his main business has been firewood. He also works on a family farm in West Chesterfield.

Sarafin said the last two years that he’s made maple syrup have been higher than normal yields, his highest yield two years ago at 45 gallons.  Normally, he makes between 30 to 35 gallons, and sells syrup, maple candy and granulated sugar.

Last year, he tapped a little later than normal, on March 7.

“I’m going to keep a close eye on the weather and see what it tells me; not too early, not too late, I’ll try to hit it in the sweet spot and have the best season I can have,” Sarafin said, adding that at 100 taps, he can set them all in an afternoon.

“I’m hoping for a good year. With agriculture, you have to be pretty optimistic. There’s an old saying - a farmer has to be optimistic or he wouldn’t be a farmer,” Sarafin said.