Parks honored by Westfield Boys & Girls Club ahead of retirement 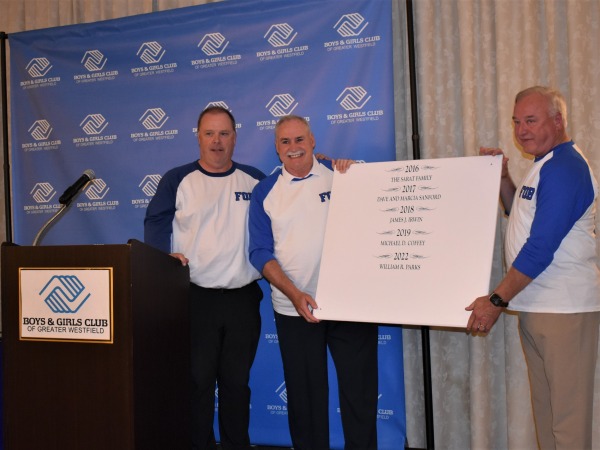 Speaker after speaker talked about Parks’ commitment to the Boys & Girls Club movement, and even more importantly to the children who attend the programs and to the staff he has mentored over the years.

Boys & Girls Club of Greater Westfield President James Irwin started the night by thanking Parks for his dedication, and gifting Parks and his wife with a trip to Ireland from the Board of Directors.

State Sen. John Velis, a former club mentor, presented Parks with a certificate of recognition from the Senate, as did state Rep. Kelly Pease from the state House. U.S. Rep. Richard Neal sent a proclamation from Congress honoring Parks’ service.

“For Bill, it’s not just a job. All the young men and women who have been through the club, their success is your success,” Velis said.

Westfield Mayor Michael McCabe, a 20-year board member at the Boys & Girls Club, could not attend the event, but also sent over a proclamation declaring Sept. 23 to be William R. Parks Appreciation Day in Westfield.

Among other achievements noted on the city proclamation, read by Bo Sullivan, Parks’ successor as CEO, was that in the 18 years Parks worked in Westfield, the club grew from serving 100 kids with an annual budget of $600,000 to serving 350 kids on a $3 million budget. Also, during Parks’ tenure, two additions were added totaling $7 million, tripling the size of the club.

Sullivan pointed out the shirt that he and many others in the room were wearing, with the initials FOB, standing for “Friend of Bill.” On the back was the number 33, which Sullivan said was Parks’ college basketball uniform number at Fitchburg State.

Sullivan also commented on the three-quarter sleeves on the shirt, which he joked were made on “a Bill Parks budget.”

Ron Hadorn, a former colleague of Parks from a Boys & Girls Club in eastern Massachusetts who is now the vice president of the national organization’s Northeast Region, brought a plaque from the National Conference of Boys & Girls Clubs, naming Parks as an Exemplary Executive.

Hadorn, who has served the Boys & Girls Club for 35 years, said he almost left the organization at one point, until Parks reached out and offered him a job, and he has been with them ever since.

Eric Oulette, executive director of the Greater Westfield Chamber of Commerce, said he didn’t have a plaque or an award, but he will at the Chamber’s annual dinner on Nov. 16, at which Bill Parks will be presented with a Lifetime Achievement Award.

The Westfield club’s chief operating officer, Kellie Brown, also spoke. She said the mission of the Boys & Girls Club “is to enable all young people, especially those who need us most, to reach their full potential as productive, caring, responsible citizens.”

Brown said Parks always went above and beyond for the youth and the staff, to make sure they reached their full potential, including herself in that category.

“He made me a better person,” Brown said. She said when she was going through both the darkest and the happiest of times, including divorce, deaths and births, Parks enabled her, inspired her to try harder, and reminded her that caring is the most important thing you can do in your life.

Bo Sullivan and Jim Irwin then returned to the podium to announce that Parks would be given the highest honor of the Boys & Girls Club of Greater Westfield, by putting his name on the club’s Wall of Fame, reserved by people who have taken leadership roles in funding and fundraising for the club. They also announced the establishment of the Bill Parks Scholarship Fund, “for any kid who needs anything.”

Parks had the last word. He said from their first night in Westfield, when he and Jan were given a free salad as a welcome to Westfield at the School Street Bistro from the owner, “I felt like I was at home. He welcomed me, and didn’t know who I was,” he said.

He thanked his family, many of whom were present, including his parents and siblings, who he said were all Boys & Girls Club kids.

“We are examples of the Boys & Girls Club movement and what it can do,” he said.

He thanked his staff, singling out Brown and Chief Financial Officer Lerryn Godden, who were already in Westfield when he started.

“We can’t grow and be able to provide more services to kids without a dedicated staff,” Parks said, adding that Sullivan as a member of the board went with Parks on many of his fundraising visits.

“Bo is going to do a great job. He is doing a great job. Don’t forget, when he calls, answer the phone,” Parks said.

He told those present to remember that whenever the board is in the community asking for funding, they have already given.

Parks ended by thanking the kids: “I want to thank our club kids that take advantage of what we offer to them. Give them opportunities, and they’ll make it happen,” he said.