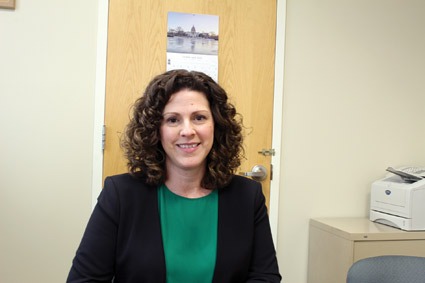 WESTFIELD – After becoming the interim principal at Highland Elementary School back in August 2019, Jill Phelan officially took over as the school’s new principal on Feb. 24.

Since officially becoming the principal, Phelan said the transition process has been a smooth one. She said, “It’s been great, to me the only thing that has changed is that I’ve dropped the interim tag. The support from my staff, the families, and the community has been overwhelming, it’s been incredible.”

One of the biggest issues at the school Phelan said she is working on its chronic absentee rate, particularly on half days or days with two-hour delays.

“We’ve noticed those days are a struggle at our school, we have a lot of students who don’t attend so we started something called Husky Bucks,” she said. “They’re tickets that are given to students on those days and then on the day report cards come out we’ll do a drawing for a family prize.”

In addition to attendance, Phelan said she and her staff are also focusing on social emotional learning and self-regulation.

“We’re working on implementing take a break spaces in classrooms and teaching students how to recognize they need a break and how to utilize those spaces along with social emotional learning through different social skills lessons at each grade level,” she said.

In order to find new principals for the school district, Superintendent Stefan Czaporowski said he and the administration team recently revamped the hiring process by including more community stakeholders in the process.

“I believe we’ve perfected our hiring process to include as many stake holders as possible,” he said, “We start with a hiring committee made up of staff members, teachers, administrators, one of our district’s principals, parents and one School Committee member.”

He said once the committee is put together, they then interview the candidates and narrow it down to between two and four candidates before they meet with staff, attend a community forum and spend time in the school they applied for.

Along with the new process, Czaporowski said the district also implemented a Google Form so community members can give feedback on the candidates. He said, “We also created a Google Form so stake holders involved in the process, and of course staff and parents have an opportunity to provide feedback to me. And that helps me make my decision.”

Phelan added that she is ready for the next step as the school’s principal. She said, “I’m happy that it’s kind of my school now and I’m excited that I have the opportunity to keep working with the staff and families to try new things and keep Highland moving in the right direction.

A decision on who will be the next Westfield Middle School principal may come as soon as March 5.

Czaporowski told Reminder Publishing as part of the process, he would accept feedback from stakeholders though March 3. He said he was “hopeful” he would have an announcement “by March 5 or 6.”

Finalists Jessica Kennedy and Rebecca Thompson participated in day-long interviews that included administration, staff and students on Feb. 27, followed by individual 30-minute meet-and-greets with the community. Kennedy is currently an assistant principal at the middle school while Thompson is the co-principal of Amherst-Pelham Regional Middle School.

The two are vying to replace current Principal Paul Newman, who will retire in June.