POW/MIA remembrance tables honor those who did not return 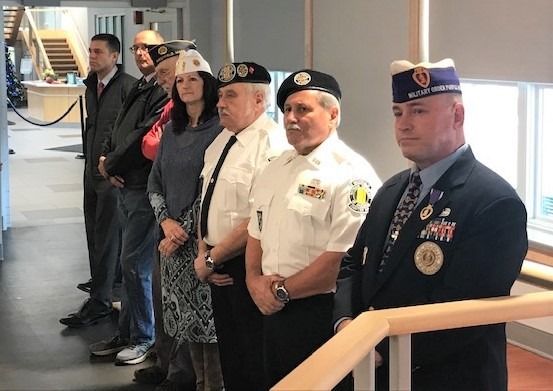 WESTFIELD – Two POW/MIA Remembrance Tables will be permanently hosted in the city as a reminder that not everyone who goes to war comes back.

The tables honoring Prisoners of War and those Missing in Action – one at the Westfield Senior Center and one at The Arbors of Westfield - were dedicated Dec. 16 and are sponsored by The Sons of The American Legion Squadron 124.

According to Legion Commander and City Veterans Grave Officer, Gene Theroux, the Sons voted to fund and to purchase two complete POW/MIA Remembrance Tables with the goal to find two locations that would permanently host them.

Each table is set for one according to the POW/MIA poem, which is framed at each table:

“This Table set for one is small — Symbolizing the frailty of one prisoner alone against his oppressors. Remember!

The Tablecloth is white — Symbolizing the purity of their intentions to respond to their country's call to arms. Remember!

The single Red Rose displayed in a vase reminds us of the families and loved ones of our comrades-in-arms who keep the faith awaiting their return. Remember!

The Red Ribbon tied so prominently on the vase is reminiscent of the red ribbon worn upon the lapel and breasts of thousands who bear witness to their unyielding determination to demand a proper accounting of our missing. Remember!

The Candle, the candle is lit—Symbolizing the upward reach of their unconquerable spirit. Remember!

A Slice of Lemon is on the bread plate to remind us of their bitter fate. Remember!

There is Salt upon the bread plate—Symbolic of the families tears as they wait. Remember!

The Glass is inverted—They cannot toast with us this night. Remember! The Chair—The chair is empty. They are not here. Remember!

Remember! — All of you who served with them and called them comrades, who depended upon their might and aid, and relied upon them, for surely, they have not forsaken you. Remember!

Remember! — Until the day they come home, Remember!”

“We were pleasantly surprised at the absolute positive response for the honor and privilege to participate by both the Westfield Senior Center and the Arbors of Westfield,” said Theroux.

Sylvernale, 2Lt., U.S. Army Air Corps, a navigator whose plane went missing Jan. 17, 1945 in the Burma-India area and his remains were never found.  Sylvernale’s cenotaph – a monument to someone buried elsewhere, especially one commemorating people who died in a war – is at the Sylvernale family plot in the Southwick New Cemetery.  On July 1, 2015, the remains of former Westfield resident U.S.M.C. Captain Richard W. Vincent were returned to Westfield after being identified on Oct. 21, 2014 after being discovered during the excavation of a construction site on the island of Tarawa.

Theroux said there are a number of cenotaphs at Pine Hill Cemetery and at St. Mary’s Cemetery for those who never came back from our nations wars.  Currently, more than 81,900 Americans remain missing from WWII, the Korean War, the Vietnam War, the Cold War, and the Gulf Wars/other conflicts, he said. Out of the more than 81,900 missing, 75 percent of the losses are from the Indo-Pacific, and over 41,000 of the missing are presumed lost at sea.

“At all Sons of The American Legion official meetings there is a designated POW/MIA Empty Chair as a physical symbol of the thousands of American/POWs still unaccounted for from all wars and conflicts involving the United States of America,” he said. “This is a reminder for all of us to spare no effort to secure the release of any American prisoners from captivity, the repatriation of the remains of those who died bravely in defense of liberty, and a full accounting of those missing.  Let us rededicate ourselves to this vital endeavor.”

Theroux said the Sons are grateful to both the Westfield Council of Aging and to the Arbors of Westfield for displaying the POW/MIA Remembrance Table.