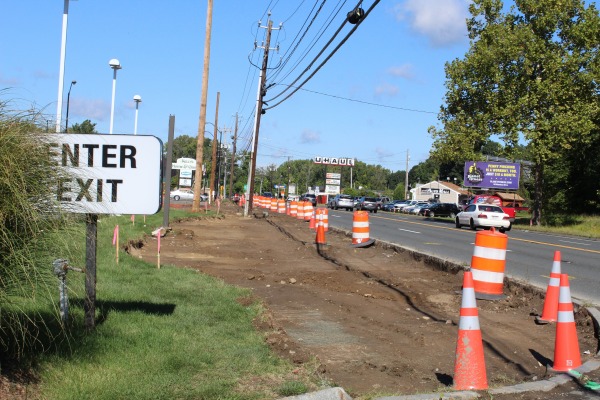 The first phase of the project is to widen the road to prepare the site for the new traffic lights.
Reminder Publishing photo by Dennis Hackett.

WESTFIELD – Construction has begun on Springfield Road for a new traffic light in order to smooth traffic flow and redevelop part of the Shortstop Grill building complex.

The first phase of the project is to widen the road to prepare the site for the new traffic lights, which are set to be installed next year according to City Engineer Mark Cressotti.

Cressotti said the city is engaged with Fuss and O’Neil, an engineering consultant firm based out of Springfield, while Caracas Construction, a company based out of Ludlow, is doing the road work.

In order to secure funding and permission for the project, Cressotti said the city and the Shortstop Grill owner Nabil Hannoush had some hurdles to jump.

Before even thinking about getting funding, Cressotti said the city had to get permission from the Massachusetts Department of Transportation. “The Mass DOT was very concerned with the disruption of traffic flow so we had to go through them first before we could do anything else,” he said.

He added that they needed to get state approval for this project in particular because it’s taking place on a state highway. Because of that, whenever there are delays it has to be constrained to a single lane to not completely disrupt the traffic flow.

According to Cressotti the project did end up receiving its funds from MassWorks. He said this type of funding is only given out when a project of this size creates jobs as a result of the development plan.

Cressotti said one of the driving factors for the redevelopment plan was Hannoush’s desire to create more jobs through the redevelopment of the Shortstop Grill complex and adjacent property. As a result of the project, Planet Fitness will be relocating to the complex from its current location on Mainline Drive.

“The owner wanted to create job opportunities and raise profits through the redevelopment of the building,” Cressotti said.

While the road work will be finished by the end of the construction season, there will still be plenty of work to be done next spring. “There is a lot of lead time for the steel masts for the signals so they won’t even be delivered until March of next year,” Cressotti said.

He added that there are certain trigger dates for the funding next June, but there is no concrete timetable for when the construction will be completed.