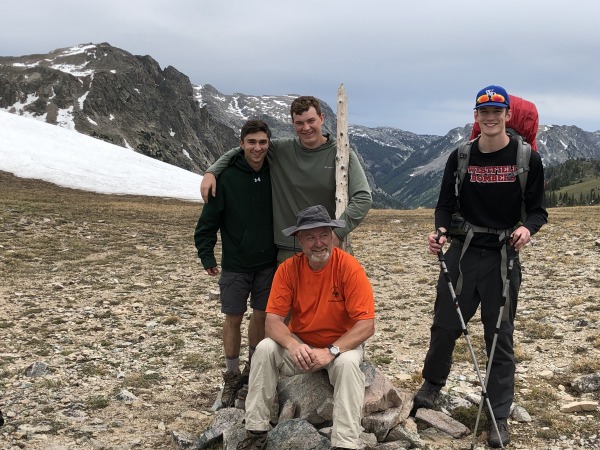 Dave Flaherty, St. Mary’s Troop 109 Scoutmaster, said this is the biggest class of Eagle Scouts the troop has seen in a long time, and it is a rare achievement to make the rank of Eagle Scout.

“This is the largest Westfield Eagle Scout Class in recent memory,” he said, “Only about four percent of boys who enter scouting earn Eagle Scout.”

Trent Stucenski, Aidan Cioch, Ethan Flaherty, Zachary Hall, Joe Crean, William Fouche and Aidan Burke will all be honored for their achievement of Eagle Scout after completing their Eagle projects and receiving their final merits earlier this year.

Stucenski, who also teaches piano at the Boys and Girls Club for third through eighth graders, said he helped out with Westfield’s 350th anniversary pancake breakfast. “I constructed games like corn hole and ring toss for children to be played at the pancake breakfast,” he said.

Cioch, a professional yo-yoer, said he made plenty of memories during his High Adventure trips, which are trips such as 100-mile canoe trips or backpacking adventures in national parks. For his Eagle project, Cioch aimed to create friendships.

“I built two Buddy Benches to foster friendships and acts of kindness, which were donated to Highland School and Abner Gibbs School in Westfield,” he said.

Like Cioch, Ethan Flaherty’s favorite memories were from the High Adventures as well. “My best scouting memories were out on the trails with everyone, on adventures such as the one last summer in the Wind River Range and Grand Tetons of Wyoming.”

He also contributed to the anniversary pancake breakfast with gigantic, historic picture frames.

Hall, a recent graduate from the Smith Vocational and Agricultural School, said his Eagle project was about organizing and building period-correct children’s games and focused on games for handicapped children. He said his favorite memory was one of their trips.

“Our High Adventure trip to Glacier National Park, it’s not every day you cross paths with a grizzly bear,” he said.

Crean, a freshman at Holyoke Community College, also built a Buddy Bench for Paper Mill Elementary school in an effort to help end bullying for his Eagle Project. He said he was thankful for all the help he received with his project.

“Huge thanks to the Lumber Mill in downtown Westfield for their donation to my Eagle Project. And a special thanks to Mrs. McMahon for the added pressure and support that helped me complete all of my Eagle Scout requirements by the deadlines,” he said.

Fouche, a sophomore at Westfield High School, said he built a post and rail fence for the Arcadia Wildlife Sanctuary in Easthampton to separate the parking lot from the field where the Sanctuary holds its events. He said his favorite memory was the trip to Yosemite National Park. “I enjoyed the challenging terrain and the feeling of accomplishment along with the beautiful views and the time I spent with the guys in the troop,” he added.

Burke, a senior at St. Mary’s High School, said he finished his project back in April when he, along with the help of some friends and family, helped build four new picnic tables to be donated to his school. He was thankful for his family after reaching Eagle Scout and said, “I’d like to thank my parents for helping me get this achievement. They really pushed me to work on this and I wouldn’t be here without them.”

Flaherty reflected on his time working with the new Eagle Scouts and said, “As their former Scoutmaster, it’s been a pleasure to work with these guys, and I’m honored to know all of them. We’ve had some amazing, memorable adventures over the last 10 years.”