Use of AED in Municipal Park saves a life 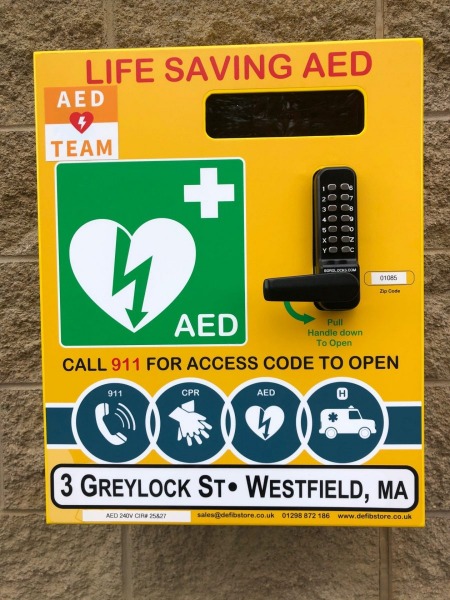 The outdoor AED box installed at the Municipal Playground in Westfield recently helped to save a life.
Reminder Publishing submitted photo

WESTFIELD – The Automated External Defibrillator (AED) box that was installed in September at the Municipal Playground and courts at 3 Greylock St. was used recently to save a life.

The heated outdoor box was one donated to the Parks & Recreation Commission by the KEVS Foundation. Susan Canning, director, said that Westfield Gas & Electric installed the unit, which the utility also sponsored along with Westfield Bank.

At the Parks & Rec meeting on April 12, Chair Michael Tirrell said the AED’s were put up in various places around town. “The KEVS Foundation has been so generous. We always hope we don’t have to use them. A few weeks back, we did have to use one at the Municipal Playground,” he said, adding, “Scott LaBombard used the AED and saved someone’s life. We always say if these things save one life, they’ve more than paid for themselves.”

LaBombard, a member of the commission and president of the Westfield Little League described the experience. “Being involved in Little League and having the training gave me the confidence to do it. But the AED walks you through it. It will even monitor the heart and won’t even deliver a shock if not needed.  My wife and I were down there for the first time in five months. The stars were aligned; it wasn’t this guy’s time yet. Hope we get these boxes installed in all parks in the city,” he said.

Tirrell said Parks & Rec is undergoing an effort right now to inventory the AEDs in town, determine priorities, and make them accessible to other parks. “We’ll have more on that as we go forward,” he said.

Parks & Rec liaison to the City Council, Nicholas J. Morganelli, Jr. related the lifesaving event to the council on April 15.

At-large Councilor Dave Flaherty said there is no question the AED saved a life a few weeks ago. “Having that device made all the difference in the world to that gentleman. We should have these devices at all public facilities where there are people. They do actually save lives, and are very easy to use; pretty much bulletproof,” he said.

At-large Councilor James Adams asked about legislation that passed the state last year requiring AED installations in parks.  “I believe Sue Canning went to Boston, and all parks are required to have AEDs,” he said.

Ward 2 Councilor Ralph J. Figy, who coaches cross-country at Westfield Technical Academy, said the Legislature did pass that every coach for every team is responsible to have an AED for all games and practices.

The law, Section 54C, states that each school district must maintain at least one AED on site at each school facility where instruction is provided, and the school administration must ensure that an AED and AED provider is readily available at any school-sponsored athletic event.

“They are at most of the parks, but sometimes they’re locked up in a building during practice time. Having a few more of them around in a secure manner is a good thing. Kudos to Susan Canning,” Flaherty said.

In her announcement about the Municipal Park outdoor box installation in September, Canning said the box is like a safe deposit box in a hotel room, with electricity that keeps the AED warm in the winter and cool in the summer, and made out of indestructible metal which cannot be breached.

She said for anybody in that area that goes down and needs CPR, someone may go to the box, call 911 and receive a code from the dispatcher to open it, and then grab the AED and bring it to the victim who is receiving CPR. The dispatcher will send first responders and also walk the person through how to use the AED.

“All of that will take place before the first responders get there,” Canning said in the announcement.

Canning started the KEVS Foundation in 2011, a non-profit organization that helps educate people about “Sudden Cardiac Arrest” after Canning’s son, Kevin J. Major, died from a condition called Hypertrophic Cardiomyopathy while swimming in Congamond Lake. KEVS Foundation's goal is to help raise awareness of “Sudden Cardiac Arrest” through education, cardiovascular screenings for young persons and to provide state of the art Automatic Emergency Defibrillators (AED) in communities. Donations from these screenings will go toward purchasing AEDs.