Westfield boys turn lemons into lemonade to help others 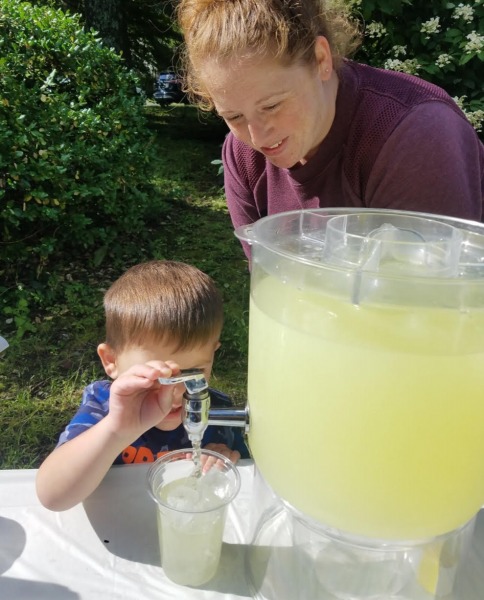 Wyatt Connor pours lemonade at his stand over the summer with his aunt Karly Grimaldi.
Reminder Publishing submitted photo

WESTFIELD – Six-year-old Reid Connor received a citation from Acting Mayor Ralph Figy recently after he and his 4-year-old brother, Wyatt, raised about $240 between a lemonade stand and family tag sale this summer.?With that money, the two purchased 60 pairs of gloves and 60 hats for students at Highland School.

Ali Connor, the boys’ mother, said she initially wanted them to run a lemonade stand for a charity, but Reid had another idea for what to do with the money.

“He told me that there were a lot of kids in the winter last year that didn’t have hats and gloves for the cold weather and he wanted to help them out,” she said.

Connor explained that friends, family and relatives all came together to help the boys with their lemonade stand and to donate to their cause. She added that from the lemonade stand alone they raised about $160. Along with monetary donations, the boys’ great aunt, Mary Comerford, from Scottsdale, AZ, chipped in by knitting 10 scarves to donate along with the hats and gloves.

After the lemonade stand, the brothers also participated in a family tag sale where they sold some of their toys to contribute even more to the kids in need.

“The boys wanted some more money to pitch in for hats and gloves, so when we held our tag sale in September they sold some of their toys,” Connor said.

While this is the biggest contribution the boys have made to the community so far, Connor said that they have donated to various causes in the past, including Toys for Tots.

Connor said that she and her husband Nick have always wanted to teach their sons how important it is to help people in need. She expressed how proud they are of their boys for what they’ve been able to do.

Connor added that she was hopeful her boys might inspire others to help out this holiday season. She closed, “My boys did a great thing with their lemonade stand and I hope they can inspire other children to give back this season.”