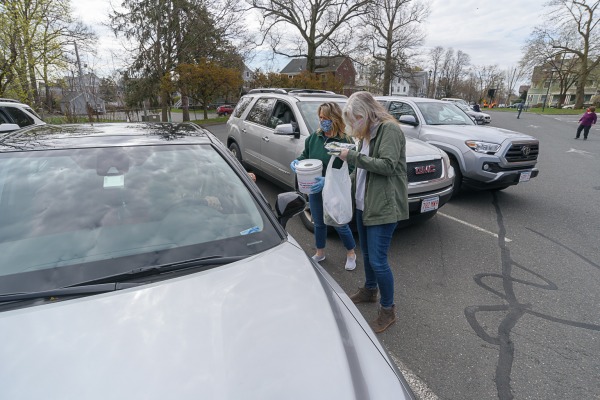 Masks are distributed by Westfield Emergency Management and the Health Department at City Hall on April 25.
Reminder Publishing photos by Marc St. Onge

WESTFIELD – A donated supply of cloth masks distributed by the city of Westfield were scooped up almost instantaneously by residents, prompting swift and early closures to distribution sites on April 25.

Volunteers from Better Than Bandanas and Mask Makers of Westfield sewed and donated 1,000 masks to the city, which, in turn, gave them out as a public safety measure coordinated by Westfield Emergency Management and the city’s Health Department.

“It was very well-received. I just want to thank the volunteers who made the masks,” the Health Department’s Kathi Cotugno said. “They were all Westfield locally made masks, made by volunteers. They donated them to the city to cover all healthcare workers and first responders, which we took care of first. Then we had this batch of 1,000 and our decision was to offer them out to the community.”

Split into equal inventories, the supplies were distributed by city employees and volunteers at four sites.

Three of the distribution locations – City Hall, the Sons of Erin and Blessed Sacrament Church – opened at 10 a.m. and were quickly out of masks.

“We had nearly 500 cars at City Hall this morning,”?Cotugno said. “This morning we were out in 15 minutes.”

The fourth site at Second Congregational Church was forced to open early, per police order, when vehicles began backing up onto Western Avenue. All of those masks were gone before the scheduled start time of 1 p.m.

"The police came up and we needed to make a decision for safety purposes,”?Cotugno said.

“People are thankful and, of course, people are upset that they didn’t get masks,” added Nicole Gravel-Blaney, who helped coordinate the Second Congregational Church site.

While there was disappontment, Cotugno noted the exercise demonstrated how effectively Westfield has been able to communicate with the public about the health crisis.

Westfield Emergency Management also noted via its Facebook page that efforts to provide masks to the public would continue.

On April 27, the department made an appeal for all-purpose thread that would allow mask makers to continue their work. To donate, email emanagement@cityofwestfield.org.