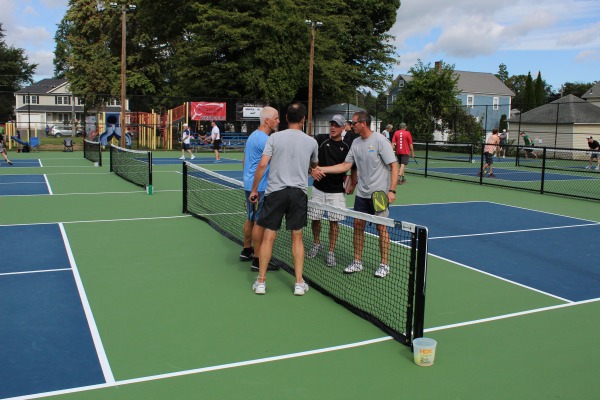 To celebrate the opening of a new Pickleball court, two tournament were staged.
Reminder Publishing photo by Dennis Hackett

WESTFIELD – This weekend the Westfield Pickleball Association hosted two tournaments to mark the grand opening of its courts.

Renovations to the former tennis courts at Westfield Municipal Park resulted in six pickleball courts.  An additional American Disabilities Act compliant court is waiting on a net and is expected to be open this week.

Pickleball is a hybrid racket sport that mixes elements of tennis and ping pong. Players use solid paddles to hit a plastic ball similar to a wiffle ball on a court that is slightly smaller than a tennis court. And just like in any other sport, healthy competition sparked the matches during Sunday’s tournament.

Nan Stolpinski, organizer of the Westfield Pickleball movement, said pickleball is one of the fastest growing sports across the country. She said the local scene has been booming since 2014 when the YMCA opened its first courts. In 2017 when they opened the outdoor courts, the club had just eight members, but its mailing list now includes hundreds of people. Stolpinski said she thinks this is just the beginning.

“I think it’s growing internationally, and you will see pickleball at the Olympics in the next couple years,” Stolpinski said.

In her opening speech at the men’s tournament Sunday Stolpinski thanked everyone for pushing the city council to renovate the courts before the crowd was quick to thank her for her efforts in spearheading the entire movement.

Stolpinski quickly pointed out the community was one of her favorite parts of the game.

“It’s loud, exciting and so many good things always happen in this sport,” she said.

After a lunch break play resumed with the players split into two groups based on their point totals from the morning’s matches. The winner of each group was then determined by the total number of points they scored in each match.

Sue Canning, one of the organizers, said it cost $20 to participate in this weekend’s tournaments and the club hosts open sessions every week at the Westfield Municipal courts. She added that the money goes toward food for the players at the tournament and equipment for the club.

Shannon Small, Westfield’s United States of America Pickleball Association ambassador, said the open sessions are popular among residents, especially the morning ones. She said on any given morning as many as 40 people use the courts at a time. Canning added that up to 25 players use the court in the evening.

While equipment can be hard to find, interested players can purchase equipment online or in a limited supply through the club’s own vendor Pickleball Vibe, run by Xuan Le.

Anyone can play pickleball with the Westfield club. Small said people of all ages, from 13 all the way to 82, are current members, and everyone is welcome to play if they want to come pick up a paddle.

Interested players can use the USAPA Places2Play app to find local pickleball courts or stay connected with Westfield Pickleball on Facebook for times when other players plan on using the courts.