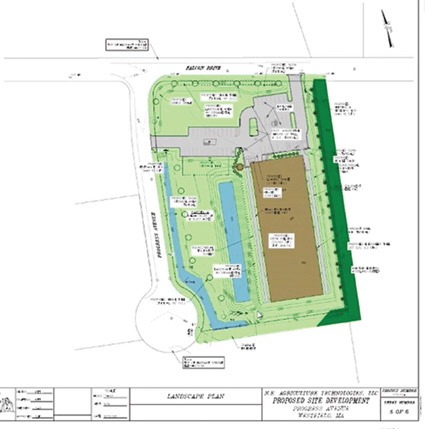 WESTFIELD – After the Planning Board decided against a marijuana retail and cultivation site plan at 0 Progress Ave. at its last meeting, representatives for the project brought forward a proposal without the retail location.

Keith Terry with Sherman and Frydryck Land Surveying began the public hearing by providing an updated site plan after removing the plan for the retail portion of the proposal and starting with a discussion about stormwater drainage.

Terry added that the stormwater management system had already been approved by the city.

After Terry’s overview of the site plan, Kaily Hepburn and Rob Wolf, two of the representatives for the project, gave a presentation summarizing the changes since the last meeting.

One of the ways the greenhouse will be preventing odor getting outside is with an HVAC filtration system.

"These units draw the air from the interior of the building, recycle it, have an odor mitigation technology installed in the aperture of the unit that pulls the air out of the building, cools it, provides humidity control and then pushes the air back in. We are constantly recirculating the interior without allowing anything to escape,” Wolf said.

If any of the HVAC units were to go down, Wolf said it would be a quick process to service it.

“The reason why I like this particular layout is it lends itself to maintenance, we don’t have to go inside the building to get access to the equipment, its outside on a pad. If one unit fails, we have four or five outside working, so you have tremendous redundancy and ease of access,” he said.

When asked about the risk of one of the carbon dioxide tanks being damaged, Wolf said it would not cause any damage, it would just be an inconvenience.

“It would be more of an unfortunate incident of losing carbon dioxide versus something that could explode. A puncture to that is going to be benign, it really doesn’t pose a risk, just an inconvenience,” he said.

Hepburn said that with the retail permit being denied at this time, the petitioner may try to apply for another one in the future.

As part of the project, Wolf said the team is planning ahead for safety because of expected regulations coming in the near future.

“We’re creating a safe environment in all our sites because we think that is the right and prudent process going forward because of what we see as potential regulations coming down the pipe in the next couple years. We’re building that into our entire operation by capturing the water, so it doesn’t get released and the odor mitigation,” he said.

As part of the approval for the site plan, the representatives agreed to remove a section of parking on the Progress Avenue entrance, which they were in favor of.

“We would have no objection of removing those parking spaces on the west side and allowing that access drive on Progress Avenue, and I think that’s a good location for the second access. If we remove those parking spaces, I think we meet our objective,” Wolf said.

Ultimately the board unanimously approved the site plan contingent on the parking changes.