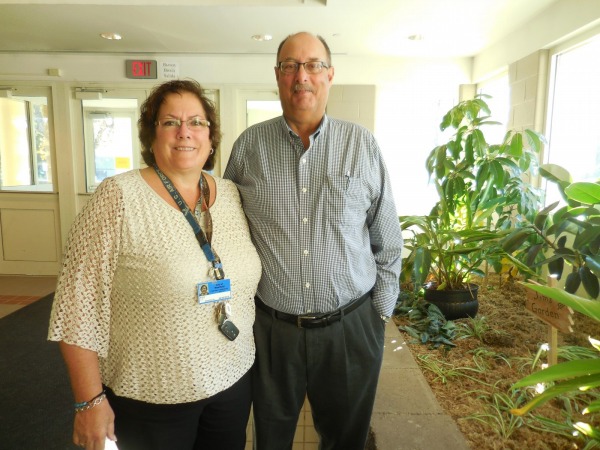 WESTFIELD – For the seventh straight year, Westfield Schools will host its food drive at Westfield Technical Academy on the Monday before Thanksgiving so families in need in the school district will be able to have a Thanksgiving dinner.

Sue and Ralph Figy, two of the organizers behind the food drive, said they started the drive in 2012 after Westfield Superintendent Stefan Czaporowski suggested it to them once they both had retired. In its first year the drive only reached between 50 and 70 families, but this year the drive is looking to provide a Thanksgiving dinner to nearly 225 families.

The Figys said the food is divided into bags by the size of the families. Ralph noted that Westfield Gas and Electric donated bags for families that have four to six people but some of the families have as many as 14 people. He said that they give the bigger turkeys to the larger families. “We do turkeys, a green bean casserole, a stuffing, a dessert, whatever you would expect in a typical Thanksgiving dinner,” said Sue.

While the Figys  are given a list of the sizes of the families but not any of the names, the school keeps track of the families. Once the food is packaged together for each family, it is then shipped to each school to be given out.

Sue said that they don’t waste any of the food they can’t use during the drive. “The food we that we don’t utilize for our drive will go to one of the food banks at the various schools in the district,” she said. “There’s no waste,” Ralph added.

Sue explained that they help support kids throughout the year as well with food from the food bank.

“We also have kids on a weekly basis that we’re giving food to throughout the year. We have kids we reach out to but it’s very discrete. We don’t want to single anybody out but we want to make sure there aren’t any hungry children in our schools,” she said.

Sue explained that volunteers come in on the Friday before the drive as well to help set up for the day on Monday, and people are also welcome to bring in donations on that day.

Between the volunteers and their partners, the Figys said they are thankful for the support they get from the community.

“We’re very lucky to have had so many people donate us gift cards. We have such wonderful people giving us turkeys – Firtion Adams, Advanced Manufacturing and Thrifty Car Rental,” Sue said.

While those three local businesses make up some of the turkey donations, they also had an anonymous donor chip-in this year as well.

“He had called and said you don’t have to call anyone else, we’re buying all of them,” said Sue. “That was so sweet, you find people are very giving at Thanksgiving.”

Among the donations the Figys are looking for this year are about 100 turkeys, various canned goods, dry goods, toiletries and some perishable foods. According to the flyer for this year’s food drive they are looking for canned peas, corn, gravy, carrots, cranberry sauce, beans, tuna, peanut butter, pasta sauce and juice.

“If you can’t get us a turkey, you can’t give us canned goods, give a monetary donation, we can use gift cards to Stop and Shop, Price Rite, Big Y and Walmart. Those are always good,” Ralph said.

In particular the Figys are looking for ingredients for green bean casserole, including green beans, fried onion rings and cream of mushroom soup.

They added that all of the donations have to be in by 12 p.m. on Monday afternoon so the schools can have the food in time for delivery. “We just fill orders and ship them out, kinda like Amazon,” Ralph said.

Along with the drive at the school, the Figys are also working in conjunction with Coldwell Banker and the Westfield Senior Center, who are also accepting donations for the drive.

Once the food drive ends, the Figys next order of business will be the annual clothing drive in the schools.

“It’s a one day deal that carries us through the year,” the pair added.