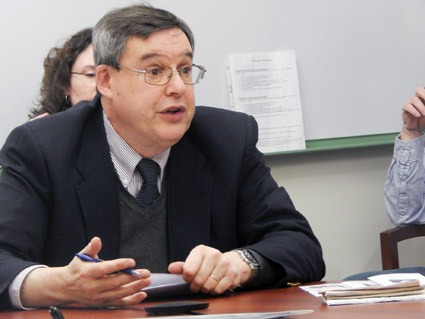 WILBRAHAM – The Superintendent Search Process Subcommittee plans to recommend the Massachusetts Association of School Committees (MASC) to help with the search for a new district leader at the School Committee’s Jan. 12 meeting.

At its Jan. 5 meeting, the subcommittee unanimously voted MASC as its top choice after interviewing MASC Executive Director Glenn Koocher and Bill Erickson, a retired superintendent of the Hampshire Regional School District, who now serves as a staff member of the New England School Development Council.

Subcommittee and School Committee Chair Peter Salerno said Superintendent of Schools M. Martin O’Shea would draft a position to MASC informing the organization that it has been chosen at a preliminary stage.

“If NESDC is not going to be selected, let’s take them out of the question right now,” he added. “The School Committee, I know, will opt to listen to what we’re basically recommending.”

Subcommittee member William Bontempi said he considers hiring a search firm an investment to the search process for a new superintendent, an idea that Salerno and subcommittee member Lena Buteau concurred with.

“We pay to be members [of the MASC],” he added. “I think using them to their potential is a worthwhile endeavor.”

Koocher told subcommittee members the pool of extraordinary superintendent candidates has significantly decreased compared to a generation ago.

“There are several reasons for that,” he explained. “It’s a very difficult job. I think many of you may have realized, if you’re involved with public education, no matter how hard you try, no matter how good you are, in Massachusetts you will fail in some technical way based upon the standards set up by the state Department of Education ... The regulatory climate for public education in Massachusetts is as rancid as it is anywhere in the United States.”

He added he considers the Hampden-Wilbraham Regional School District to be a good district for a superintendent to work.

“This is a district that is not in need of being blown up and recreated,” Koocher said. “We know what trouble is and you don’t have trouble ... You’re in a very good place.”

MASC completes eight to 10 superintendent searches annually for its member districts, he noted. During the past three years, the organization has successfully completed more than 20 searches and all of the superintendents hired by each district currently remain in the position.

Koocher said MASC would help the Superintendent Search Committee to identify the search and decision criteria, a timeline, and send information out to its recruiting list of 1,400 people in the state.

“Eighty-five thousand people a year hit our website and I should mention parenthetically that about 95 percent of the people who want to be superintendents routinely go to websites of the School Committee Association and the Superintendents Association,” he added. “Both of those sites are available to you without fee to post and advertise your vacancy.”

The subcommittee would also present its recommendation about the composition of a Superintendent Search Committee on Jan. 12, which would include 14 members.

The search committee would be composed of three School Committee members, two principals to represent both towns, an elected official from Hampden and Wilbraham, three district teachers representing the elementary, middle, and high school grade levels, respectively, two citizen at-large members to represent the two communities as well as a parent from each town.

Subcommittee members also agreed that one of the teacher members on the search committee should represent the district’s union.

Bontempi was initially concerned with the even number of search committee members due to the potential for a stalemate vote, but his worries with the configuration were alleviated by Salerno’s response.

“If I were on the committee I would resign and let you guys all figure it out,” Salerno said. “I think we can do that. I think it’s manageable either way.”