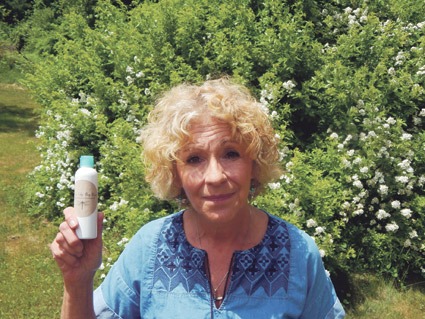 HAMPDEN – Mindy Meeker has patented her bug repellent oil called “River’s Edge Bug Repel,” which she makes at her home in Hampden. She started making the bug repellent three years ago.

Meeker, who has also worked as a massage therapist for the past 22 years, told Reminder Publications she developed the bug repellent from some of the oils she uses in massages, including grape seed oil. She added lavender and lemon grass for scenting, and put citronella into the mix due to its properties as a bug repellent.

“I started using it and I’d give it to friends and family and we used it two summers in a row,” she added. “We went camping in somebody’s backyard in Monson next to a frog pond, which was bug laden and when everybody got there I had them put on the bug juice.”

She explained she and her friends put on the oil at 6 p.m. and by 11 a.m. the following day no one had a bug bite on them.

“I have given it to some friends who have horses and they are thrilled with it,” Meeker said. “Flies and gnats don’t like it either. Because it is an oil base, it lasts for a long time. Just about everything on the market is in a water base, which evaporates. The oil quickly absorbs into your skin and the essential oils continue emitting their scent so the effects last much longer than the water based version.”

She considers her product “safe” and “all natural,” noting that it doesn’t contain anything else in it except for essential oils and grape seed oil.

Grape seed oil is considered good for one’s skin and hair, she noted.

“If you are going for a walk, rub a few drops in your hand and fluff it through your hair,” she explained. “If you are walking where you worry about ticks, put some on your hair and ankles. If you are hiking through the woods, just rub a little into your hands and then onto your exposed skin.”

Meeker said she added lemon eucalyptus, which repels mosquitoes and ticks, to her repellent after hearing news about the Zika virus and the prevalence of ticks carrying Lyme disease in the area.

“I’ve got two daughters who are pregnant and all the tick and the mosquito-borne diseases; I really started getting worried for everybody,” she noted. “Bugs that make you sick are scary and I don’t like putting chemicals on me. If I can’t pronounce it, I don’t really want anything to do with it. I don’t eat it, I don’t put it on me.”

She added she sells River’s Edge at farmers markets locally, including in Forest Park, Holyoke, and South Hadley.

“I’ve been bringing it to baseball games and softball games, bringing it to the parents to see if they like it,” Meeker said. “All the games are after 5 [p.m.] and all the bugs start coming out. I remember when my kids were playing ball and I’d be at fields dying of the bugs.”

Meeker explained she originally called her product a bug juice, but decided to rename it after her River’s Edge massage business, which she has been running in Hampden for 14 years. Prior to that, she lived and operated her business in Wilbraham.
Meeker can be reached at mt.meeker@hotmail.com or 478-2158. For more information about River’s Edge Bug Repellent at www.riversedgebugrepel.com.

Would love to know how to get your all-natural bug repellent. My daughter is about 7 months pregnant and YES I am terrified of the Zika virus. I grew up in Hampden at 32 Valley View Dr. My brother still lives there.

I use Rivers Edge and I love it. The oil doesn't ruin your clothes, or weigh down your hair. And I love the scent. It really works.