Action Ambulance takes up residence in Hampden to serve town 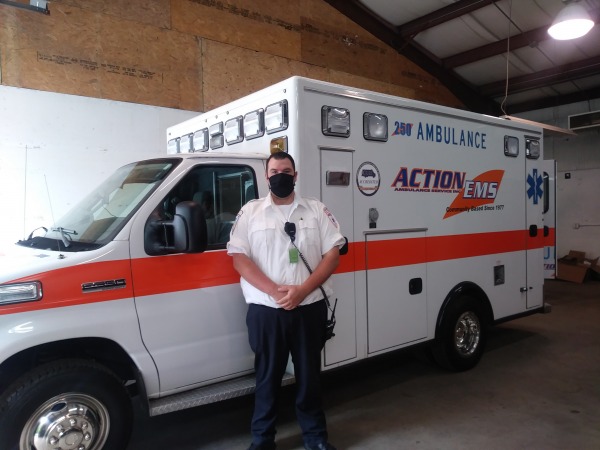 Rock Thibeault, Action Ambulance’s vice president of operations for the Pioneer Valley stands with an ambulance in the garage at 122 East Longmeadow Rd.
Reminder Publishing photo by Sarah Heinonen

HAMPDEN – “So far, so good,” Rock Thibeault, Action Ambulance’s vice president of operations for the Pioneer Valley, reported with a chuckle. In the first 11 hours of July 1, the company’s first day as Hampden’s in-town emergency transport service, there had been no calls.

Having an ambulance located in Hampden has been a long time coming. Until recently, Hampden had a contract with American Medical Response. Interim Town Administrator Bob Markel said the impetus for changing services was a dramatic increase in emergency response time after the company stationed the Ambulance in Springfield.

“We were seeing response times of 20 minutes and up,” Markel said.

After a bidding process in which three companies participated, Action Ambulance bid the contract at $333,000 per year, roughly a third of what the other companies bid.

Still, Markel acknowledged the contract is a significant new expense for the town, but because the contract includes a profit sharing model, the town has the opportunity to recoup a portion or all of the cost depending on how many calls to which the ambulance responds. The town receives a revenue for each call in town and mutual aid calls in other towns.

“It saves money for the town,” Thibeault said, “We build a model that projects the revenue,” and charge the town based on that. At the end of the first 15 months, the contract can be renegotiated if the number of calls does not match the projected model.

Action Ambulance prides itself on excellent patient care and in a good working relationship with the towns in which it operates, Thibeault said. As part of the contract, the company offers CPR and EMS training to town employees.

Thibeault explained that not only are their advanced life support (ALS) ambulances licensed by the state, Action Ambulance is also certified by the Commission on Accreditation of Ambulance Services (CAAS). CAAS is an independent industry organization which requires full verified self-inspections every three years and requires “top-of-the-line” training and gear, he said.

“It raises the bar,” said Thibeault.

Action Ambulance takes full precautions regarding COVID-19 transmission, including gowns, masks and an aerosolized viruscide sprayed in the ambulance to sanitize after every potential COVID-19 patient.

As precautions around the coronavirus are rolling back, Thibeault said it’s once again becoming more common for family members to accompany the patient to the hospital  in the ambulance. He said family members of minors are always allowed to ride with their loved ones.

“In a non-COVID-19 world, it’s always appropriate for family to ride,” Thibeault said.

Action Ambulance’s home in Hampden is at 122 East Longmeadow Rd., where there are two crew members stationed 24 hours a day, seven days per week.

“We feel this is a great base of operation to service anywhere in the region,” Thibeault said. He clarified that Hampden calls take precedence. “It’s the town’s truck.”

Markel spoke of the importance of having an advanced life support ambulance in town. He told Reminder Publishing that a friend’s wife had had a stroke and because an ALS ambulance was close by and brought her to the hospital quickly for a procedure, she made a full recovery.

“Time is tissue,” Thibeault said, adding that response times are everything in medical emergencies. Action Ambulance has a projected response time of eight minutes or less anywhere in Hampden.