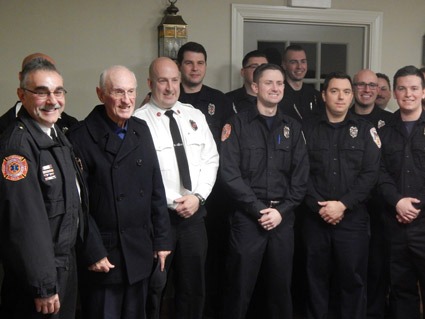 WILBRAHAM – The main lobby of Town Hall was bustling with excitement and joy as a crowd of residents and firefighters congratulated their new Fire Chief David Bourcier on his appointment, following the Board of Selectmen’s unanimous vote at its Jan. 30 meeting.

Bourcier, who has served as acting fire chief since former Fire Chief Francis Nothe retired on Jan. 20, has served as deputy fire chief for the past three years and joined the department in 1982.

“I joined the call auxiliary department and really the Fire Department has been my passion,” he told the selectmen.

He said during the meeting he has deep roots to Wilbraham and to the department – he grew up in town and his father Donald Bourcier is a retired call fire lieutenant who was on the job for more than 30 years.

“I think that’s where I got my love of the Fire Department as a kid hanging out down by the fire station,” Bourcier said. “It’s very humbling that I am on this department … I basically worked up through the ranks. I’ve had basically every position in the department, except for mechanic.”

Bourcier stated he plans to keep the department operating smoothly and learned skills from Nothe that he would apply to his leadership of the department.

“I learned a lot from Chief Nothe,” he explained. “Chief Nothe was really a good chief to work for. He knew those budgets inside and out and that’s something I’m learning right now. But I’m really excited for the job.”

Selectman Robert Boilard described Bourcier as a “straight shooter” in regards to presenting ideas during meetings about the town’s capital project or finances.

“I appreciate that and your honesty and the information that you’ve come forward with,” he told Bourcier. “It speaks a lot about yourself.”

Selectman Robert Russell asked Bourcier what he envisions as his biggest challenge in the next few years with the department.

“The biggest challenge is to just keep on moving this department forward,” he told Russell. “We’re always trying to raise the bar of this department to provide that good service to the community. Those are really the two main challenges – providing the best service we can and also keeping our firefighters safe. That’s something I’ve been passionate about. I want to take care of the people that work for this department … If I can achieve those two things I think we’re going to be in good shape.”

Board of Selectmen Chair Susan Bunnell asked Bourcier if there would be any specific areas in the department’s budget to create efficiencies.

“That’s something that we’re always looking at,” he noted. “We also want to improve that service quality and that sort of delivery. I think there’s going to be an actual nice balance that we have to stick with being mindful of the budget, but also providing those services.”

The board also chose to appoint Fire Capt. Peter Nothe as acting deputy fire chief while a search is underway to fill the position.

After the meeting, Bourcier told Reminder Publications the department hopes to ask residents to fund a combination ladder and pumper truck called a Quint truck sometime in the near future. The Quint could replace two of the department’s oldest vehicles in its fleet with one truck.

“What we’re doing is we’re consolidating so instead of buying two separate vehicles it’s less expensive to buy one vehicle that can handle both capabilities of a pumper truck and of a ladder truck,” he explained. “It’s prudent of us do to this kind of combining of two vehicles into one because it’s going to reduce maintenance costs by over 50 percent.”

He added the Quint truck would be a 25-year investment.