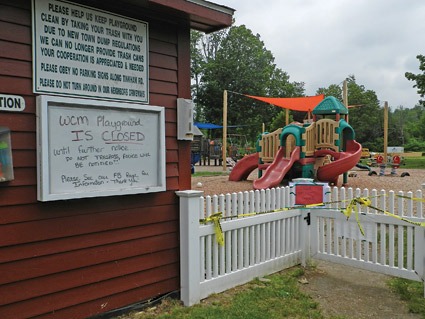 Wilbraham Children’s Museum has placed caution tape and ‘Do not enter’ signs warning playground-goers that the park is closed until further notice.
Reminder Publications photo by Payton North

WILBRAHAM – The Wilbraham Children’s Museum was forced to close their playground last week after vandalism occurred to their picnic pavilion construction site.

According to President of the Board of Directors of Wilbraham Children’s Museum Lisa Chapline, the holes for the footings of the pavilion were dug and a few of the footings were placed and leveled.

The vandal knocked the footings over and ripped one in half.

“This undid many hours of work and caused damage requiring one tube to be replaced as well,” Chapline said.

Local Realtor and resident Roger Roberge and his team are building the new pavilion for the Wilbraham Children’s Museum.

“Many of the hours are being donated by him and his team, as well as other volunteers helping out,” Chapline added, “It is sad to see people working hard out of the goodness of their hearts and have it undone, no matter how small the damage was.”

Following the discovery of the damages, Chapline, with the support of the Board of Directors, decided to close the playground.  Chapline noted keeping the playground closed until construction is further along in the building stages will keep everyone safe.  Additionally, closing the playground has allowed the museum to do maintenance on the property including the planting of new privacy hedges, cutting down a damaged tree, cleaning of the plays capes and sandboxes, as well as raking out mulch.

Chapline expects the park will reopen within the next two weeks.

“I don’t think the irresponsible acts of few define the wonderful, supportive community that we have.  Since this happened and was reported, we have seen an insurgence of people donating to our museum,” Chapline said.

The best way Chapline believes the community can support the Children’s Museum, aside from donations, is by volunteering.

“I believe that if you want to see change, be the change.  Set an example, and people will follow.  This is how we build a community that supports each other and our children, in such a positive way.”

For those who may consider joining the Wilbraham Children’s Museum family through volunteering, they can email  Chapline at info@wilbrahamchildrensmuseum.com.