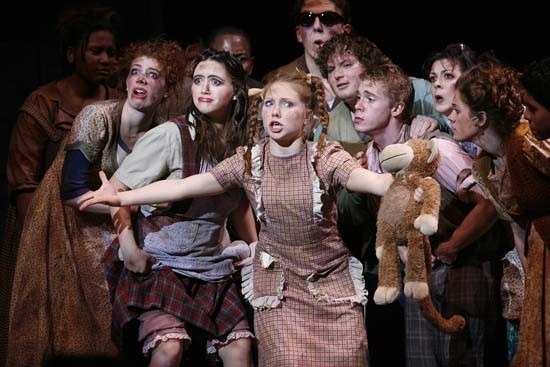 WILBRAHAM – Two very different plays are coming to Wilbraham at the Evangel Assembly of God at 348 Stony Hill Rd. The first is “The Miracle Worker,” a play about how Hellen Keller, who was deaf and blind from infancy, overcame her disabilities with the help of her teacher, Anne Sullivan. It was made into a movie in 1962 starring Anne Bancroft and Patty Duke.

“‘The Miracle Worker’ has a local connection,” said Colin Tracy, the Creative Arts Director at the church, where his wife, Laurilee Tracey, works with him and his father is the pastor. Feeding Hills is the birthplace of Sullivan and the location of a memorial to her.

“She’s super passionate about it,” said Colin said of Apprey.

The church produces three theatrical shows each year – at Easter, Christmas and in the Spring. The Christmas show for 2019 is “Into the Wardrobe,” an adaptation of C.S. Lewis’s book “The Lion, The Witch, and The Wardrobe,” but the shows that the church produces aren’t always well-known works. For example, this year’s Easter play was an original work titled “Shadow of a Doubt,” about the biblical story of Doubting Thomas, the Apostle who initially refused to believe in Jesus’s resurrection.

While the shows at Easter and Christmas are free, Colin said, the Spring Show raises money for the church’s charitable work.

The proceeds from “The Miracle Worker” will go toward funding mission projects in Haiti. Colin said that the church has partnered with Convoy of Hope and had “adopted” a village in the Caribbean country. The church sends people to help with water filtration and work with orphanages in schools.

“We want to have a sustainable impact,” Colin said.

“Urinetown” is a look at a dystopian future in which a 20-year drought has caused private toilets to be outlawed and admission is charged to use public facilities. Those who can’t pay are sent to a slum, Urinetown, where a man named Bobby Strong tries to fight back.

Colin is directing the show with his wife as assistant director. Laurilee usually works behind-the-scenes, on costumes and stage design.

“She has the eye for design,” Colin said about his wife.

Colin said the musical is a satire of Les Miserables, a wildly popular musical based on Victor Hugo’s novel about poor peasants at the birth of the French Revolution.

“It’s a show I’ve always wanted to do. It’s not the safe choice,” Colin said. “Safe isn’t necessarily how you want to go through life.”

Despite the title, Colin said, the show is completely family-friendly. To assuage people’s concerns, he came up the tagline, “Urinetown: Where the humor is clean, but the people definitely aren’t.”     “A lot of the jokes are just sort of poking fun at the unrealistic things that happen in musicals,” Colin said. He said there is a lot of fourth-wall breaking, where characters speak directly to the audience.

“[Urinetown] doesn’t take itself too seriously. It wouldn’t work if it did,” said Colin.

“Urinetown” will run for two weekends, June 7 to June 9 and June 14 to June 16. The Friday night shows are at 7 p.m., while the other four performances begin at 6 p.m.

Tickets for the Miracle Worker are $10, $5 for children and seniors. Urinetown tickets are $15, $10 for children and seniors. The Tracys will use the money raised from “Urinetown” to produce more works through the Firefly Collective, which has already auditioned for “Shadowlands,” an original work by Colin which will be staged in September. There are also auditions for “Illuminate,” in August.

The Traceys have partnered with The City Church in Springfield to host an Arts & Theater Summer Camp in August and would eventually like to start an afterschool arts program for kids.