Fabulous 50s Diner offers blast to the past 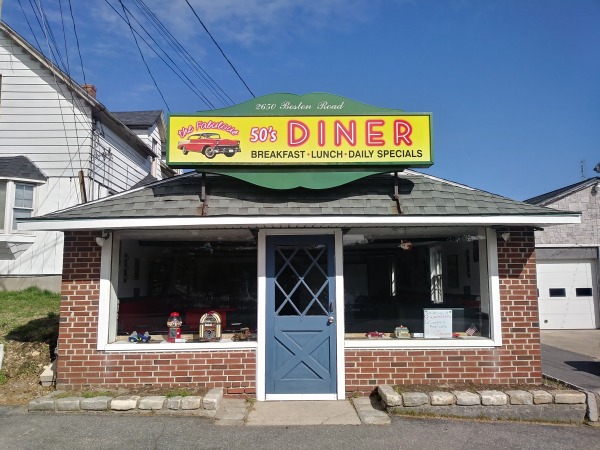 WILBRAHAM– Black stools sit in a line in front of the fire engine red counter. There are guitars mounted on the wall, highway signs hung as decor, and chrome touches are everywhere. Wilbraham residents can step back in time at the Fabulous 50s Diner.

“There's nothing like this in the area,” said John Wrona, the owner, who opened the restaurant at 2650 Boston Rd., on April 12.

“[Business is] good, but it could be a lot better,” Wrona said, adding that he had picked “the worst time to open,” so close to Easter. Still, he said, there are regulars starting to come in every morning, sometimes for breakfast and lunch.

Wrona, who has been a tractor-trailer driver for 53 years, said decided to open the business because it was on his bucket list. He said he was inspired by the Food Network show, “Diners, Drive-Ins and Dives.”

The restaurant was originally built by the Luzi family, owners of Luzi’s Auto Body, located next door. When Wrona was a kid, he said, the building was a small pizza place.

“Everyone used to come here after work,” Wrona remembered. After the Luzi family shut down the pizza place, they leased the building to a few other restaurants over the years. It has been closed for about 5 years.

Wrona said he drove by all the time and would look at it. He finally decided to approach the owners in the Summer of 2018. Unfortunately, the previous tenant had gutted the building.

Wrona said all the fixtures were gone, the wiring had been pulled out, and the ovens and equipment had been taken. The Luzis, who still owns the property, replaced the roof and the wiring. Wrona brought in new restaurant equipment and appliances and fixed up the interior.

Now the restaurant is filled with 50s memorabilia – some donated, some purchased. Wrona said he grew up in the 50s and has always been interested in custom cars, hot rods, and car shows, and the decor reflects that interest.

The breakfast menu features omelets made with jumbo eggs, bottomless cups of fresh-ground coffee, platters, breakfast sandwiches with home fries, and sausages. For lunch, there are 8 oz., Black Angus hamburgers, soups, burgers and fries, and pulled pork sandwiches. Wrona said everything is fresh, nothing frozen.

The restaurant is open from 6 a.m. to 2 p.m., seven days per week and seats 30 customers. Wrona, who is only there on the weekends, has ten employees. He said it was important to him that they were all Wilbraham residents.

Wrona said his vision is for “customers to have good, fast, hot food,” and his focus is on “courteous and cleanliness.”

Can't wait to try! I love this place already...