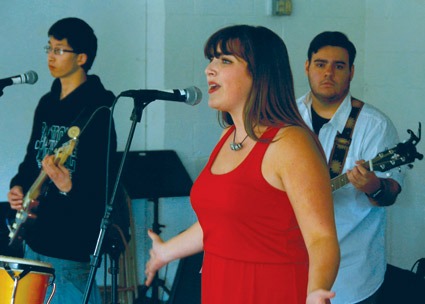 WILBRAHAM – On Aug. 27 Falcetti Music‘s students put on their annual FalcettiFest, “Sounds of Summer.”  Falcetti brought their finest students-turned-performers to Spec Pond Pavillion on Sunday where they spent the afternoon with their friends and families enjoying barbecue food, playing instruments and singing to their favorite tunes.

The afternoon featured kid’s bands, rock groups and a few individuals performing covers and original pieces.  Director of Marketing Sarah Lloyd said the event is a “big party” and it celebrates the end of summer and “all the good work” the kids took part in over the summer.

The kids who participated in the event ranged from elementary schoolers to college students.  While some musicians are beginners, others are highly accomplished.  Over 60 students performed on Sunday.

“This summer fest is designed to give them [students] an outdoor performing experience specifically playing the pieces they focused on other the summer.  With this said, they may have been working on the pieces for much longer than just the summer,” Lloyd said.

Each group performed three to five songs.  Some songs performed included “Your Man” by Josh Turner, “All Along the Watchtower” by Jimi Hendrix, “How Far I’ll Go” from the movie “Moana” and “Don’t Stop Believin’” by Journey.

For more information about joining in the fun at Falcetti, call 543-1002.