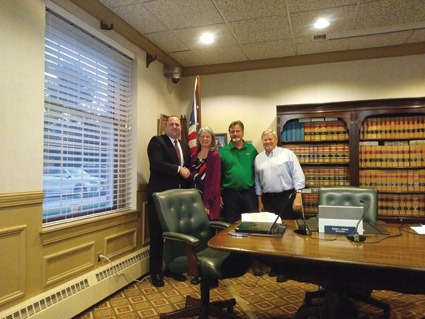 Fire Chief Michael Andrews poses with the Select Board after signing his contract.
Reminder Publishing photo by Sarah Heinonen

Fire department Pvt. Anthony Arventos told the board that the Wilbraham Fire Department had received a $155,057 Assistance to Firefighters Grant through FEMA for the purchase of 22 self-contained breathing apparatuses, three facepieces for those apparatuses, and rapid intervention team (RIT) bags that are used to save injured or trapped firefighters.

As part of the grant, the town is required to pay 5 percent of the total. In this case, $18,962. Arventos said that they got quotes from two companies and one of them was willing to come down in price since the CEO is from Wilbraham. The final cost will be more than $2,000 lower than budgeted.

A public hearing on proposed work by National Grid brought several residents to the meeting.

Mandy Patenaude from National Grid explained to the board that they would like to install three poles boxes, which, she said do not require new poles, and cable to replace worn-out equipment.

Three pole boxes would be installed on Shirley Street, at house number 14, between numbers 21 and 23, and between houses 35 and 37B. The work would begin Nov. 14 and last about 10 days.

Actual power outages would be limited to one day on each road, between 9 a.m. and 2 p.m., Patenaude said. All neighbors would be alerted before the date of the outage. None of the work will require trenches or lawn digging, she said.

Mike Manteria, of 20 Stone Gate Cir. expressed concern, stating that he had negative experiences with National Grid in the past, including the company not having notified Dig Safe and workers drinking on his lawn at 2 a.m. during a subsequent incident.

“What’s the accountability?” Manteria asked. Patenaude said she couldn’t speak to previous incidents since she was unaware of them.

Work on both roads was approved by the board.

“You’ve got a good framework,” Joliker said. “There are people in town already doing age-friendly practices.” She gave the board an outline of age-friendly best practices.

Massachusetts was designated as an age-friendly state in 2017. Municipalities in the state will have the chance to be designated as such in 2020 through a community compact commitment. Joliker said that when a town is designated as age-friendly, there are benefits, such as technical support, less red tape, and grant funds. She said there were “tons of resources.”

Dubord and Chairman of the Senior Center Feasibility Study Group Dennis Lopata reached an important milestone in officially recommending that the town move forward on selecting the 2.3-acre property behind Town Hall for the location of the new Senior Center.

Lopata told the board the study group’s work had spanned “over five years, 40 meetings, and 19 possible locations.”

Dubord said that the feasibility study group has only spent about $7,000 of the allocated $30,000 so far, though they are expecting invoices for preliminary design schematics and estimated project costs from the feasibility architect, John Catlin or Catlin Associates.

Dubord said that Catlin is an “expert in senior centers,” having worked on those in several area towns.

“We probably should start thinking about a building committee,” Selectman Robert Russell said. The next step is to work with that committee and create a presentation to inform voters of the costs and project details at the annual town meeting in May.

Resident Matt Villamaino asked how the committee would be selected.

“You don’t have to be an architect or a contractor,” Chair Susan Bunnell said. Russell agreed, saying they would be looking for a diverse group of people with different backgrounds.

Bunnell said that she would like to see a formal report from the feasibility study group, “something comprehensive that we can put on the website,” in the interest of transparency, she said.

“There’s so much red tape you have to go through,” she said.

Delaney’s Market, which opened on Sept. 17. rushed to get a food permit at the meeting the night before. Joanne Whyland, the general manager, said that the permit had somehow been overlooked and they were made aware of the requirement that morning. The business was  fully inspected and ready to open.

Whyland thanked the board for fitting their request into the agenda and invited them to attend the ribbon-cutting and food and wine-tasting the next day.

Fieldcrest Brewing and Fern Valley Farms are partnering on Sept. 28 from 12 p.m. to 5 p.m. to add alcoholic beverages along with the orchard’s apple and pumpkin picking.

“One of the biggest goals of my farm is to work with local companies. As soon as I heard [FieldCrest Brewing] opened, I thought it’d be a good partnership,” Dan Fernandes of Fern Valley Farms said. The Select Board approved the request after making sure patrons would be carded by the law.