Self-storage facilities voted down by Hampden Planning Board 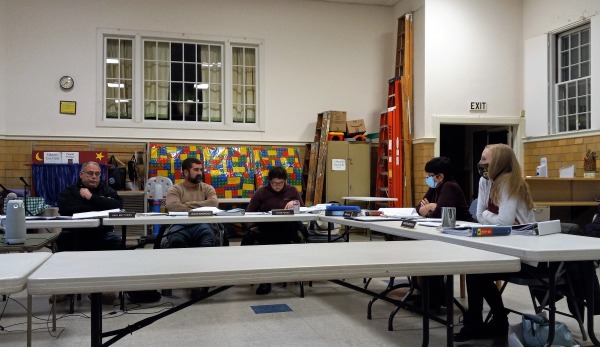 The Hampden Planning Board discusses conditions to be placed on a special permit for the self storage proposal at 16 Somers Rd.
Reminder Publishing photo by Sarah Heinonen

HAMPDEN – After months of arguments and documentation, the proposed self-storage facilities at 2 Somers Rd. and 16 Somers Rd. failed to pass the Hampden Planning Board.

Following a four-and-a-half hour meeting on Dec. 1 during which the board hammered out potential conditions under which the company, Hampden Self Storage, might operate, the final vote was three in favor and two opposed. A special permit must receive four of five votes to pass.

A week later on Dec. 8, the vote for 16 Somers Rd., LLC, broke the same way, with the same members voting for this project as had voted in favor of the first.

“I think we did the town justice in doing a really thorough job,” Planning Board Chair John Matthews said of the months-long process. For his part, Matthews said he voted in favor of the special permit forthe 2 Somers Rd. project because he felt the petitioner, Attorney Daniel Garvey, “met the requirements of the bylaw.” He recognized that not everyone would agree with him and said no matter whether the special permit was approved or denied, the matter will likely be appealed to land court. “It’s not a fun position to be in, being on the Planning Board, especially with this,” Matthews said of having to make contentious decisions.

Heather Beattie, one of the two Planning Board members to not vote for the projects, told Reminder Publishing, “After careful review of the language used in the bylaws, as well as all the information presented, I determined that this storage unit proposal – regardless of the well-intended conditions to be placed on the special permit – was not appropriate for the chosen location in the town of Hampden.

After the  meeting on the second project, Christina Brodeur, who voted against the special permits, said, "I think it was the right decision and I think the bylaw supports that decision."

The nearly 20 conditions that the board created for the 2 Somers Rd. special permit were used as a template for the proposal 16 Somers Rd. proposal. A condition was added to the second project that ensured the maintenance of the on-site Civil War-era house that was to be used as an office.

Among the most detailed of the conditions the board debated was the one that would regulate the storage of hazardous chemicals. While Garvey had previously stated the storage unit rental contract would prohibit hazardous materials from being stored on site, he also had stated that he could not ensure complete compliance.

Beyond requiring a Stormwater Pollution Prevention Plan to be submitted and approved by the Building Department, the board debated whether to prohibit all hazardous materials from being stored on site.

Planning Board member Jason Barroso, who has professional experience in hazardous materials remediation, suggested including a condition that prohibits hazardous materials over the quantities cited in state environmental regulations. He explained that the state’s 310 CMR 40 rules have determined what is considered “significant” amounts of hazardous materials, based on the substance. Spills over the specified amounts must be reported to the state.

Barroso said a spill of 40 gallons of oil he worked on only penetrated 18 inches. “That’s why I had trouble during a lot of this, because it doesn’t go that deep,” he said.

Beattie asked how deep hazardous materials would penetrate if not discovered or reported and therefore, un-remediated. Barroso said that he could not speak to a hypothetical situation, but that “ground dilution” meant spills under the amounts the state has deemed “significant” likely would not pose a threat to the groundwater.

When discussing the user contract, it was noted that a bottle of nail polish remover in a moving box would violate a complete ban on hazardous materials. Language was proposed for the contract that specified prohibition of quantities beyond “household use.” Beattie and Brodeur asked how that term is defined.

The board considered how to ensure the company would enforce the ban on hazardous materials.

“If his business is at risk, I’m pretty sure he’s going to be pretty diligent,” Barroso commented.

Beattie wanted to require the company to randomly spot-check every unit at least once a year, but Matthews suggested it be allowed for in the user contract, but not required.

Pellegrino had included a plan in the facility's operations and maintenance manual to inspect each unit with 48 hours of its rental or of a customer accessing it.

The board discussed including any hazmat found in a yearly report to the town. Planning Board member Christina Brodeur asked why Garvey would “shoot himself in the foot,” and report hazardous materials found on-site if he would be penalized for it. Barroso suggested if there was no spill and Garvey addressed the issue himself, he would not be considered in violation of the special permit.

While there was no answer given, it was also acknowledged that there was not better terminology.

Both petitioners had acquired $1 million environmental liability insurance policies. As a point of reference, Barroso said two fuel oil companies he had asked carried insurance in the amounts of $2 million per occurrence with a $5 million at a maximum. “Is this the same risk as filling oil tanks,” Barroso asked his colleagues. He called it low-risk, but Beattie argued it had high-impact.

Barroso opined insurance of $1 million per occurrence and $3 million at a maximum was sufficient for the risk and impact with the self-storage business. He noted a steel mill remediation done 15 years ago only cost $3 million.

Beattie questioned whether the permeable asphalt proposed for use at 16 Somers Rd. would pose an additional risk to hazardous materials entering the acquifer. Matthews argued the regular inspections of the units would mitigate that risk.

It was agreed that the business would need to carry continuous occurrence-based insurance, which Beattie explained covers spills based on the year it happened, not the year it was discovered. That way, should the spill go unnoticed, the insurance company would be obligated to cover it years later. It was also decided that an annual certificate of insurance would be required, with a review of the terms every five years to ensure the coverage remained adequate.

Barroso pointed out that the conditions are what the board feels should be in place to run the business, and therefore, they should apply to anyone running it. Driving home his point, Barroso asked, “If [Garvey] got the approval and sold it tomorrow, would you care?”

It was decided the special permit should remain tied to the property as is the standard.

The board discussed other conditions, such as limiting the operating hours to avoid noise nuisances, mandating the 8-foot solid vinyl fence to be a dark gray-green color to blend into the background and the sign be no larger than 24 square-feet.

Garvey did not respond to a request for comment by press time. As for the next steps for 16 Somers Rd., LLC, Pellegrino said, We'll look at our legal options and make some decisions." The petitioners have have 30 days from the date of the decision to appeal.