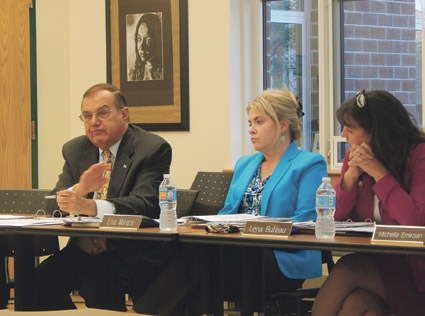 School Committee Chair Peter Salerno (left) was the only member of the committee to not vote for Albert Ganem Jr. as HWRD’s new superintendent.
Reminder Publications photo by Chris Goudreau

The committee voted 6 to 1 at its June 17 meeting after site visit discussions about all three finalists for the job, which also included HWRSD Assistant Superintendent for Business Beth Regulbuto and Kimberly Merrick, administrator of special education for the Wachusett Regional School District.

School Committee member William Bontempi, who was one member who participated in site visits, said he believes all three candidates were qualified, but he was in favor of Ganem due to his strong relationship building skills.

“What we want to do is be able to take the person that has what we need the most in this district and in my own analysis, what we need right now is healing,” he explained. “We need relationships. We have a problem. We have two towns that are basically at war with one another about this middle school unification and it pains me because the district is what’s going to suffer.”

Bontempi praised Regulbuto’s budgetary practices, noting that the head of finances for Worcester Public Schools adopted one of her budgetary models.

“I think that Beth Regulbuto could do an excellent job as an superintendent, but she can’t do it alone,” he explained. “And I think one of the biggest things that I’ve spoken to her directly about is … she is the only pillar left in the administrative office.”

He added, “I think that her ability to analyze a problem, collect the necessary data, and formulate a response to that and actually follow that through to fruition is her forte.”

School Committee member Michael Mazzuca said he was also in favor of Ganem, but noted Regulbuto would be more than qualified to serve as superintendent. He said he believes she could be hired as a superintendent in other district.

Salerno said he voted for Regulbuto due to her 10 years of loyalty to the district and because of her qualifications.

“This is not a job that is going to be done by an individual,” he explained. “We’re relying on this wunderkind guy coming in and changing everything in and of himself. We’re making a terrible mistake relying on that.”

He continued, “I believe that we have a chief executive officer position that needs to be filled. I’ve run businesses all of my life and I’ve taken a look at what characteristics are necessary, not what personalities are necessary. You need to get the right people on the bus. I’m not against Al Ganem or Kimberly at all. I look to fill the job that needs to be done.”

During the site visit discussion, Bontempi said Ganem showed an ability to create partnerships, collaborate and to take a group of “very dissimilar people” and build a team.

“His staff is a very different bunch … However, they seemed to have a very cohesive unit,” he added. “I think the visit with Mr. Ganem was one that really spoke of relationships and collaboration.”

Bontempi said when they visited Worcester Technical High School staff members and students constantly stopped to speak with Ganem just to say hello and thank him for his help.

Bontempi said the one negative aspect he learned about Ganem during the site visit was that he “over works.”

When asked whether Ganem has involvement with creating a budget, Bontempi responded by stating, “I don’t know how involved he gets in it. I know for his school and for his own department, he was responsible for devising his own budget.”

He noted Worcester’s budget is zero-line, which means the district creates a budget without any base-line items based around the needs of an upcoming fiscal year

School Committee member Lena Buteau asked if his school budget were ever cut in the past.

“I don’t know,” Bontempi said. “I didn’t ask if that had come up. I’m sure that [there are] budgetary constraints.”

Morace, who was conducted site visits, said Ganem is also part of a team that helps develop the Worcester Public Schools budget.

After the committee’s vote to hire Ganem, it met in executive session to discuss contract negotiations for the position.