Hampden Select Board announces preparation for lawsuit against HWRSD 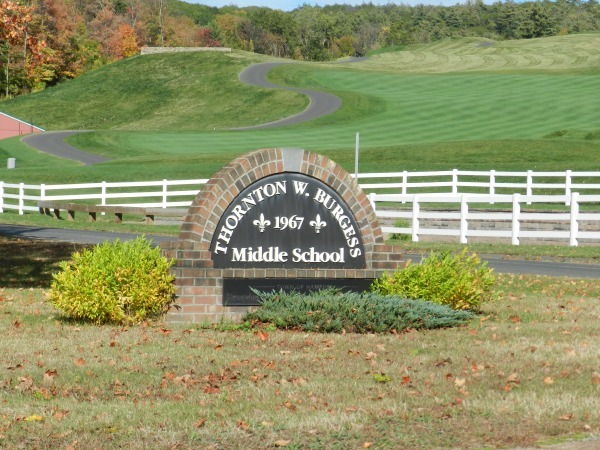 Thornton W. Burgess Middle School in Hampden is facing a potential closure following this school year. The town of Hampden is preparing for a lawsuit against the Hampden Wilbraham Regional School District in an effort to keep the school open.
Reminder Publications photo by Payton North.

HAMPDEN –  Last week the Hampden Select Board submitted a press release announcing they’re preparing to file a lawsuit against the Hampden Wilbraham Regional School District (HWRSD) in an effort to ask the court to prevent the implementation of the district’s reorganization plan that would ultimately close Hampden’s Thornton W. Burgess Middle School (TWB).

The HWRSD Five-Year Reorganization Plan has been the subject of immense discussion and scrutiny over the last several months as many Hampden residents are displeased that the plan includes the closure of TWB as well as combining grades kindergarten to seven at Hampden’s Green Meadows Elementary School.  Arguments that have been presented by residents in past meetings have been generally against the combining of grades at Green Meadows due to the potential negative social and emotional affects it could have on an older student to be attending the same school as young students.

The latest Reorganization Plan update was presented on Jan. 10 at a roundtable meeting and once again shared the proposed timeline and action steps and by school year 2022 to 2023, grades seven through 12 would be at Minnechaug Regional High School, Hampden’s grades kindergarten through six would be at Green Meadows, and then Wilbraham’s schools would be “reorganized.”  This alludes to the closure of one Wilbraham School.

At the end of the roundtable presentation it comments, “Bringing seventh and eighth grade students together creates a collaborative and strong learning community with rich and diverse learning opportunities. The reorganization plan has an educationally and fiscally sound backup solution of a K-8 Green Meadows for maintaining students according to the parameters of the regional agreement,” it continues. “This Reorganization Plan is the efforts of many people that was lead by the charge given to us by the community of HWRSD.”

In the press release Hampden Board of Selectman Chair Vincent Villamaino stated, “We have authorized our attorneys to file the lawsuit to seek an injunction in accordance with the vote taken at Town Meeting.”

The release continues, “The Town has received complaints from residents about the impact that the plan has had on the education of students in Hampden by eliminating staff and programming. Some parents, fearing further retaliation against Hampden students, have requested that their complaints be anonymous. The complaints will be gathered as part of the evidence to present to the court.”

“Residents should feel free to express their opinions to the Board and we will turn them over to our attorneys as evidence to be considered,” Villamaino said.

The release alleged that the district has intentionally attempted to empty TWB of students and has reduced the quality and quantity of art and music classes, as well as the eliminated band and chorus courses.

“The School District has used “robo calls” in an effort to solicit students to apply for transfer to Wilbraham despite past claims of overcrowding. Less staff at Thornton W. Burgess has resulted in the erosion of tradition and threatens the small Town feeling the community has enjoyed. Field trips and after school activities have been affected. The school district has announced plans to use a mailing to solicit additional transfers out of Hampden,” the release claimed.

HWRSD Superintendent Al Ganem said he could not comment on the matter at this time.