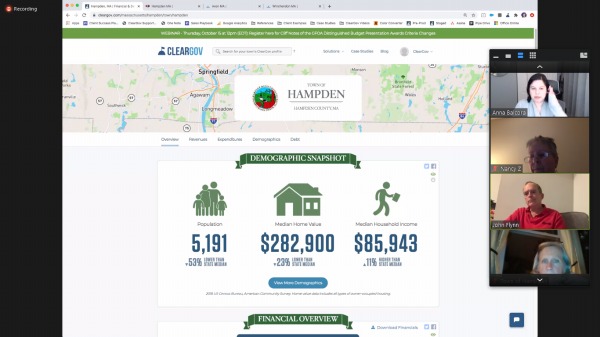 HAMPDEN – The Hampden Select Board received an update and walk-through of the new municipal transparency tool from Cleargov at its Oct. 13 meeting. Anna Balcora demonstrated how the interactive website works and said of the site’s development, “things are progressing really well.”

The town’s demographics, budget, debt, revenue and expenditure data from 2019 to 2020 are already available on the site and the company is in the process of uploading historical data from previous years. Once the historical data is available, Balcora said, residents will be able to compare Hampden to other towns in the area over time.

Users can navigate through a variety of data and choose whether to look at a broad overview or dig into details as fine as individual budget line items. Balcora showed the board how people can use interactive infographics to gain a better understanding of the town’s operations and financial information.

Balcora said Cleargov can update the information monthly, quarterly or yearly, depending on the board’s preferences. The setup and first year’s cost for the service was covered by a grant from the state Department of Revenue. The yearly cost thereafter will be about $3,000.

The Select Board members agreed that the town is ready for the site to go live and interim Town Administrator Bob Markel is working with Cleargov to create a link to the tool on the town’s website, hampdenma.gov.

At the upcoming Special Town Meeting, the town will be asked to raise $100,000 to address the removal of dangerous trees, $20,000 to increase the reserve fund and $1,000 for the conservation commission fund. From the free cash account, $207,640 would go to the stabilization fund which is essentially the town’s savings account, $190,000 would be used to lower short-term debt and $38,000 would be put toward lowering the tax rate. Select Board Chair Donald Davenport said this would result in $80,000 of net additional taxes said that he didn’t see the sense in raising funds through taxes only to return some of that money in the form of a lowered tax rate.

Alternatively, Davenport suggested putting $200,000 of free cash into the stabilization fund, $20,000 into the reserve fund, $1,000 into the conservation fund and using $100,000 to for tree removal. After that, he said, the town could use the remaining $114,000 to either lower the short-term debt or reduce the tax rate.

As a final option, Davenport suggested placing $300,000 in the stabilization fund, which he later told Reminder Publishing would reflect favorably on the town’s credit rating, and use $100,000 for tree removal, $20,000 for the reserve fund and $1,000 conservation fund. This would leave the tax rate at its current level.

Select Board member John Flynn made a case that the reason for raising money via taxes is to “keep the levy limit going in the right direction.” The board will discuss the allocation of free cash further when it meets with the advisory board next week.

A draft of a regional dispatch contract was sent to the Wilbraham Select Board and Davenport will be joining in the other town’s next Select Board meeting to discuss the matter. Glover objected that the draft had not been discussed by the board before submission to their counterparts in Wilbraham. Flynn countered that the draft contract was very similar to the document that the board had reviewed at the Sept. 28 meeting. He also noted that the board had previously approved a motion to allow Davenport and Markel to conduct regionalization business with Wilbraham on the board’s behalf. Glover questioned whether it was a formal motion or simply a discussion that had been had, but said that the point was moot since the action had already been taken.

The consideration of a person recommended for a position on the conservation commission proved problematic for the board since the candidate has an active lawsuit against the Hampden Parks and Recreation Department and the former town administrator. Davenport said that since any action taken by the board could be construed as retaliation or a bribe, the best thing to do was take no action on the candidate.

A new plumbing inspector was appointed by the board. Building Inspector Wendel Hulbert recommended Dennis Chafey Jr. to replace his father, Dennis Chafey Sr., in the role. Hulbert told the board that Chafey Jr. was a master plumber and was up to date on training and education in the field.