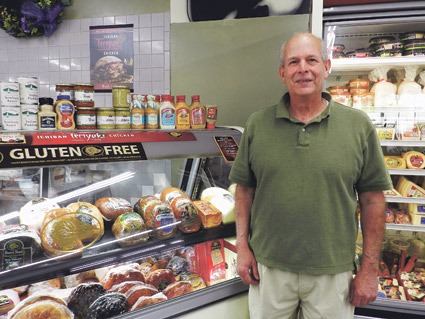 HAMPDEN – It’s 8:30 a.m. on a Friday and customers are coming into the Village Food Mart. Owner Gary Mayotte is at the register near the door and greets each person by name.

Mayotte is celebrating 30 years of ownership of the landmark grocery and it’s clear by both how he has physically expanded the store as well as its offerings and services that he is doing something right.

One customer overhears our conversation and said it’s the customer service and selection that keeps him coming back.

In the highly competitive world of groceries, Mayotte readily acknowledges, “Competition is always a concern.”  He added, “You have to do a better job, have better quality. It’s not always about the price.”

For Mayotte “doing a better job” is have an in-store bakery and deli where items are prepared daily, He takes great pride that his deli operations roasts its own roast beef and prepares its own ham rather than buy them from a wholesaler. The deli also makes fresh items such as a chicken, cranberry and nut salad.

Mayotte hasn’t been in the grocery business his whole career. He explained that while he worked for the Big Y through his high school and college years, he pursued a career as an accountant.

He has doubled the size of the market and has brought in features that are familiar to people who shopped in small grocery stores years ago, the most prominent being a long butcher case in the rear of the store.

Mayotte explained he doesn’t pre-package meats. Customers can get exactly what they want. Each order is personalized.

“If I did that [pre-package] I wouldn’t be in business,” Mayotte said.

Mayotte only sells certified Angus beef at competitive prices to those of the big chains. He called the beef the store’s “calling card.”

Mayotte pointed out how the meat case has to be replenished every day. “We wipe out every day and start fresh,” he said.

Freshness is a huge concern to Mayotte. He says the chicken the store sells comes in five times a week, while the fish and the produce is delivered six times a week.

He noted that many customers come in several times a week to buy fresh, rather than frozen.

It more than just Hampden residents who make up his customer base. “We have many loyal customers and they travel. [The store] is out of the way and we make it worthwhile,” he said.

The store also features a catering service, which Mayotte has grown over the past several years.

He has also included many organic items as well as gluten free products at the store.

Mayotte employs 25 people and he noted some of them have been with the business for as many as 22 years.

“They are the reason we’re successful,” he said.

Mayotte defies some of the conventions and trends of the grocery industry and unlike many other successful businesses Mayotte has no interest in opening a second location. With a smile, he said, “This is enough for me.”­­­