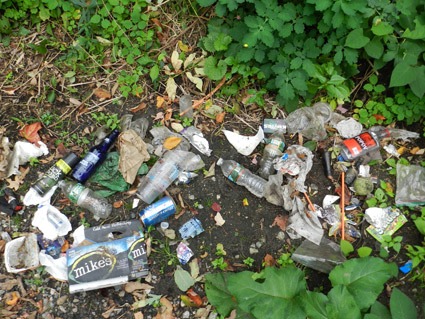 Ellen Bemben of Highmoor Drive spent 30 minutes on Tuesday picking up trash around the Rice Nature Preserve entrance. These were her findings, including several condom wrappers, a can of pepper spray, liquor bottles, beer cans and smashed beer bottles. Reminder Publications photo by Payton North

WILBRAHAM – Residents of Highmoor Drive in Wilbraham gathered on Sept. 20 at the end of their road, the entrance of Rice Nature Preserve (RNP) to express their concern for the area’s safety and cleanliness.  A month ago the street’s townspeople requested a meeting with the Wilbraham Select Board which commenced on Aug. 28, where a formal letter on behalf of the street was submitted by a Highmoor Drive resident since 1959, Ellen Bemben, requesting several changes be made to the area of the entrance of the preserve.  However, nearly a month after the meeting, residents are frustrated that they’ve seen no progress.

The submitted letter listed a series of requirements that the town allegedly agreed to uphold following a meeting with those who live on Highmoor Drive in 2005 when the preserve began.  The letter states that there was to be a large sign with the rules of RNP: the RNP was open at dawn, the RNP was closed at dusk, all dogs must be leashed and kept off neighborhood yards and lawns, owners of dogs must pick up and dispose of what pets may have left behind, all litter had to be disposed of in the regularly maintained waste barrel provided by the town and the Minnechaug Land Trust (MLT) and the 20 mile per hour speed limit on the street was to be observed at all times.  The letter continued, saying the town and the MLT was to regularly maintain the parking area regarding cleanliness, litter and trash removal and basic aesthetics to keep the area “safe, green, and to not devalue the daily life and property of Highmoor residents.”

Bemben’s letter continued to mention reasons why the agreement the street had with the town regarding the RNP entrance was now defunct.  The sign that stood at the RNP entrance that listed the rules has been gone for years, and subsequently the rules have not been enforced.  The original trash barrel that sat at the end of the street “disappeared” after several years and wasn’t replaced, and when the barrel was there, it was rarely emptied and relined by the town or MLT so it was frequently overflowing, Bemben noted.  On the website for the RNP, Bemben found that at one point the RNP was listed as being open, “24 hours a day, seven days a week.”  Multiple residents have witnessed and disposed of hypodermic needles and drug paraphernalia, used condoms along with condom wrappers.  There were also complaints individuals speeding on the posted 20 mile per hour street.

“We had a meeting in 2005, we were not asked, we were told, ‘Oh by the way, the only entrance to the RNP is on your street,’ we were not happy,” Bemben recalled.  “Nobody’s taking care of the end of the street anymore, they’re leaving it to take care of itself, and it’s not working.”

The Aug. 28 Select Board meeting was standing room only, and while residents noted the meeting felt like progress, they haven’t witnessed much action since.

Referencing quotes by Select Board Chair Robert Russell from a previous Reminder Publications article, where Russell was quoted by saying he’s “not really sure” what residents have claimed what items were found on the street, Bemben said “Him claiming he’s not really sure, is not really true.”

Bemben continued, “In essence, he’s there nodding an smiling at the meeting and then turns around and says he doesn’t really believe what the residents saw.”

When most residents walk to the entrance of the RNP, they pick up trash in the area.  John Paton of Highmoor Drive walks his dog to the end of the road every morning and picks up cans and bottles to dispose of.  Bemben says she has done the same, along with another resident who lives directly next to the RNP.

“It’s interesting, there are many empty zipper bags.  Do you know what marijuana is distributed in? Zipper bags.” Bemben noted.

Russell noted in the previous article that he had driven up Highmoor drive for a week straight and said, “I haven’t seen a lick of debris anywhere.  I’m not going to disagree with what someone may have found, I’m not going to doubt it either.”

Bemben responded, “He obviously never got out of his car, because if he did, he would’ve seen what I saw.”

She reached out to the MLT in an effort to get the group back to maintaining the area at the end of the street.  In an email response, Steve Lawson of the MLT said he thought “it would be nice if the neighbors took a more active interest.”

His email continued, “We have a group of neighbors on Washington Rd. which abuts the McDonald Nature Preserve that take an active interest in the property and helping manage it.  I think it would be good to do the same with your neighborhood.”

Bemben said it’s clear that the residents are pitching in, but it isn’t enough, and it isn’t preventative.

Highmoor resident Noreen Paton, who’s lived on the street for nearly 30 years, said her biggest concern is for the safety of children and those who are using the trails with little ones and pets.

“A new family moved into a house at the end of the street near the preserve, and for there to be this kind of activity on the end of the road, it just needs to be cleaned up.  They don’t need that around their little girl,” Paton said.

The letter the street submitted to the Select Board at their Aug. 28 meeting stated that they believe adding a streetlight on the end of the road by the RNP entrance as well as a camera would deter any littering, sexual activity or drug activities.

“For me, I think adding a streetlight and even a camera would be the biggest deterrent, they could even be solar powered.  People don’t want to do bad things in the light, and they certainly don’t want to if they know their vehicle information could be monitored,” Paton said.

Bemben added, “There were many more beer cans, bottles, used condoms and wrappers and drug paraphernalia, but the neighbors are picking up the area as best they can to keep their street clean like it used to be before the entrance to the preserve was put on Highmoor Drive.”

When Bemben was outside collecting trash on Tuesday, she said a large blacked-out SUV approached the entrance to the RNP slowly, and when the individuals in the vehicle saw her, they turned around quickly and left.  When Reminder Publications met with residents, a similar occurrence happened with a different vehicle.  Bemben speculated that if the cars were coming for a hike, they would’ve parked their car and gotten out when they saw people picking up trash, not drive away.

Ultimately, the residents of Highmoor Drive say they would like to see Select Board members come up to the road and recognize that this is an issue that should be taken seriously.  Bemben noted that after a weekend the RNP entrance sees the most trash and paraphernalia.

Administrative Assistant to the Town Administrator and Board of Selectmen Candace Ouillette Gaumond sent an email to Bemben stating that “relatively soon” there will be a traffic counter posted on Highmoor Drive to study the traffic pattern including speeding, usage, and time.  Additionally, Gaumond noted that the Board of Selectmen have forwarded a proposed regulation sign draft to the MLT and Conservation Commission for approval.

“Upon those groups’ approval, the Board of Selectmen will then approve the sign and issue a directive to have the sign made and posted at the entrance of RNP.  Once the sign is approved, I anticipate the RNP website will be revised to offer consistent regulations with the sign,” Gaumond said.