Horizons Restaurant to reopen under new ownership as Cima 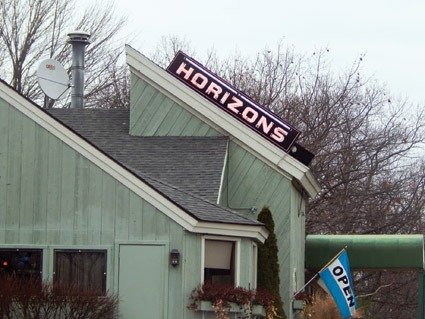 WILBRAHAM – Horizons Restaurant at 2200 Boston Road has been sold to new owners who plan to reopen the restaurant as Cima early this winter.

Mindy Sullivan, one of the new owners who currently owns Christina’s Restaurant and Pizzeria in Erving, told Reminder Publications Cima – Italian for hilltop – will be an Italian style restaurant and chop house.

She added Mark Melikian, the selling owner of the restaurant, said it was once named Hilltop prior to becoming Horizons.

“One thing that we do know is that we’re going to rely on seasonal and locally grown products that are sustainable to the degree that we can and that we want to emphasize that our menu, when we do finalize it, is going to offer options that would lend itself to both week night family dining and also be that special weekend date night destination,” she noted.

Sullivan said she and co-owner Tony Dimaio, who will be Cima’s chef, are planning a menu that would feature Mediterranean specialties, authentic Italian dishes, and “innovative entrees” that would include fresh seafood and grilled favorites.

“We want to really stress that we look forward to offering personalized and gracious service,” she added. “We want to tell people that we’re planning to provide the highest quality in food and drink options and we think that those are the building blocks to establish a new and growing relationship with the community.”

Sullivan said one dish guaranteed to appear on the menu would be scallops Genovese, which is a dish made at Christina’s.

“It is frequently a special and it’s very well received,” she added. “The scallops are generous in portion.”

She added that she and Dimaio, who is the co-owner and chef at Christina’s as well, would close the Erving restaurant when they make the move to Wilbraham.

“We would be saying goodbye to Erving, where we have many warm feelings for the client base we’ve built,” Sullivan said. “We’re talking to customers every day about our plans. Hopefully they’ll follow us to Wilbraham. I don’t think it’d be regular given that it’s an hour away.”

The owners plan to open Cima after cosmetic upgrades and furnishing changes can be completed to the restaurant, she explained. It would likely take six to eight weeks from when Horizon’s closes to when Cima opens.

“We’re planning to leave the bar intact and hopefully get underway in short order,” she noted.

She added that the front of the building would also be redesigned to fit Cima’s aesthetic and the kitchen would change to fit the needs of the restaurant.

Sullivan said she would like to review staffing requirements as well.

“I first want to meet the existing employees and hopefully we’ll be able to work with those folks as well as making some new selections and making determinations about staffing requirements,” she added.

Sullivan explained they decided to purchase the Wilbraham restaurant was because of the appeal of the town and its surrounding communities.

Melikian, who has owned Horizons for 29 years, said the new owners first approached him about purchasing the property about a year ago.

“I made great friends here in Wilbraham in other communities,” he added. “The restaurant business is all about treating people and most of my friends I’ve made through the business – either employees, ex-employees, customers – that’s the hard thing about leaving, you’re not going to have that contact with a lot of the people by a weekly [or] monthly [basis]. That’s one of the bittersweet things about it. I’ve had a great run here.”

He said he plans to some time off before venturing back into the restaurant business.

“Whether it be [to] open another [restaurant] I don’t know,” Melikian added. “Right now I want to take a little break and see what happens.”

Ok, so I have $100 in gift cards from horizons.  So do I get screwed?  I expect someone to reimburse me.