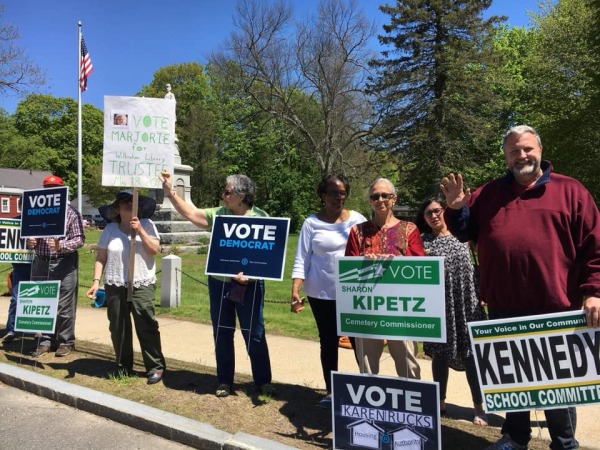 Democratic candidates campaigning ahead of the May 18 Town Elections.
Reminder Publishing submitted photo

Voter turnout for the elections was very low. Of the town’s 10,495 registered voters, only 540 votes were cast.

“It was sad that their was only a 5.153 percent turnout from voters. I would like to see more participation,” said Kennedy. He said turnout was nearly half of what it was when he ran in 2016. The lowest voter turnout in recent memory was in 2011, when only 2.71 percent of registered voters came to the polls. There were no contested races in that election.

“I will officially reach out to Maura [Ryan],” Kennedy said. Ryan ran unopposed in Hampden for a seat on the School Committee.

“I look forward to working with her,” Kennedy said. “Hopefully everyone’s on board with this time of healing and bringing everyone together,” Kennedy said, expressing that he hopes the lawsuit between Hampden and the School District will soon be behind them.

Kennedy was first elected to the School Committee in 2016. He previously told The Reminder that he hoped to use a second term to address bullying in the schools, as well as, the creation of a program for “gifted and talented” students.

The other races in this year’s election included the office of Cemetery Commissioner, in which Sharon L. Kipetz won over Robert Sullivan. The incumbent, Mary E. McCarthy, was unseated by the democratic nominee, Rik Alvarez for the office of Water Commissioner, and Karen L. Rucks won a seat on the Wilbraham Housing Authority over E. George Gordon.

The races for those three seats were each decided by less than 50 votes.

James E. Moore, Jr. was re-elected to the Planning Board, beating David A. Sanders by over 100 votes.

James S. Jurgens and Marjorie Williams were both re-elected as Library Trustees.

Two town office candidates ran unopposed. John Boilard was re-elected to a fourth term as a selectman and Robert John-Roberge II was elected to another term as Hampden’s assessor, without competition.

Interestingly, in all races in which a Democrat faced off against a Republican, the Democrat candidate won.

The term for all of the offices voted on this year is three years, with the exception of the five–year seat on the Planning Board and the two–year post on the Wilbraham Housing Authority.