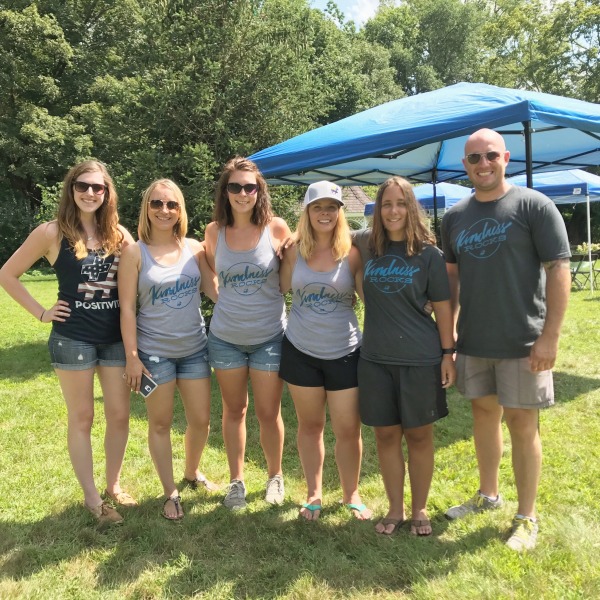 WILBRAHAM – You may have heard of East Longmeadow Rocks, maybe even Enfield Rocks, but have you heard of Wilbraham’s Kindness Rocks? Painted rocks in unique designs, hues and sayings are popping up all over the country.

Several surrounding towns began this trend in an effort to change a negative narrative and to spread kindness by hiding beautifully painted or inspiring rocks around town to brighten people’s days.

Wilbraham, however, is taking their Kindness Rocks program a step further.

Cara and Molly Cole, sisters from Wilbraham, decided to start the Kindness Rocks project by organizing an event this past weekend that invited the public to purchase and paint rocks and begin a rock garden on the Gazebo Park property.  While other groups use this group for pure fun, the Cole’s decided to monetize the event in an effort to raise money for the Minnechaug Scholarship Foundation.

Molly is a school psychologist at Minnechaug and works with the children. According to Cara, Molly heard teachers were painting the rocks in the classroom and thought that this was a great initiative to start community wide.

“Wilbraham is so community oriented that we felt it would be an embraced event by families. With all that’s going on in today’s world with bullying in schools and worldly issues adults deal with we thought this initiative was something everyone would feel good about,” Cara said.

The event on Aug. 19 sold 150 rocks and had an attendance of approximately 80 people.  Cara reported that the event raised $500 for the Minnechaug Scholarship Foundation. The annual scholarship goes to a student who exhibits kindness and generosity in the community, which correlates with the values of Kindness Rocks.

“We had such a great turnout and feedback on Saturday that we plan to do this again next year. We started an inspiration garden in Gazebo Park in Wilbraham so we encourage people to continue to make rocks throughout the year and place them there or take a rock from the garden and place it where they think someone who needs to hear a special message will find it,” Cara added,” We also love how this brought the community together so we’d like to continue the event to keep that alive.”

The Kindness Rocks event featured raffle prizes donated by local businesses, including Rice’s Fruit Farm, Gio’s Pizzeria, The Pizza Shoppe, Frankie and Johnnie’s Pizza, Painting with a Twist, Birdhouse Bungalows, Yoga by Christine, and Simply in Stitches. Additionally, Jason of the Hashtag Positivity Movement attended the event to sell his hashtag t-shirts and hats, as well as the Kindness Rocks t-shirts that he designed and sold.