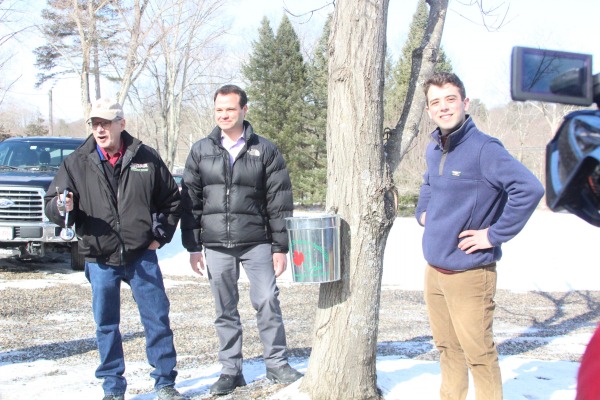 HAMPDEN – State Sen. Eric Lesser used a mallet to pound a spout into a tree that John Lebeaux, Department of Agricultural Resources commissioner, had just tapped with a hand drill.

“Now you’ve got 3,000 more to do,” joked Andrew Ferrindino of Ferrindino Maple in Hampden.

The ceremonial tapping of the sugar maple capped off a tour of the sugarhouse where the sap is processed in high-efficiency evaporators and turned into maple syrup. Lebeaux delivered a proclamation from Governor Charlie Baker, making March 2019 Massachusetts Maple Month.

Ferrindino Maple began tapping their stands of sugar maple trees, called sugar bushes, two weeks ago. That is when the spring thaw began. In maple sugaring, the daytime temperatures need to stay above freezing, while dipping back down below at night. According to Ferrindino’s website, this triggers the trees to convert their winter starches back into sugar.

The Massachusetts Maple Producers Association said that Massachusetts is the ninth largest maple producing state in the country and almost all of that syrup is sold in the state.

Lesser is the co-chair of the Food Policy Caucus in the Massachusetts Senate and said it was important to remember that Western Massachusetts is an agricultural center that stands out on maple.

Jerry Ferrindino, Andrew’s father, said that while there are a few smaller maple-sugaring operations in the area, there are none on the same scale. Ferrindino Maple has 2,700 taps on two parcels of land that generated 83,000 gallons of sugar maple sap last year.  They produce 1,200 gallons of certified organic maple syrup each year, which is sold at Big Y grocery stores, college campuses, restaurants and golf courses.

Maple sugaring season runs from mid-February to mid-April. Many sugarhouses are open to the public and sell maple products. A directory of sugarhouses can be found at massmaple.org.