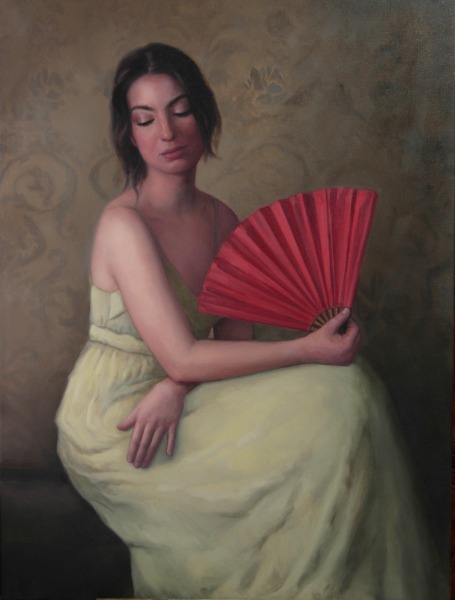 WILBRAHAM – It’s not often that people get a chance to have their work displayed alongside that of their heroes. Artist and Wilbraham native Christina Mastrangelo did just that when two of her paintings were shown in an exhibit at The European Museum of Modern Art in Barcelona (MEAM).

“It’s in honor of International Women’s Day and showcases contemporary painters from around the globe, some of whom are my painting idols.”

The exhibit, “Painting Today,” ran from March 8 through the end of May. It featured 70 contemporary women painters.

One of Mastrangelo’s two paintings, “Alexandra in Profile,” previously won awards at the Salmagundi Club in New York City, the Monson Art Show and the Academic Artists Association annual show. That portrait was painted in 2010 at her former studio at the Indian Orchard Mills.

The other painting that was shown in Barcelona, “Lady In Waiting,” was created there two years later.

Coincidentally, the subject of both paintings is Mastrangelo’s fellow 2002 Minnechaug graduate, Alexandra Pomponio.

“Creating something with an artist is a really intimate experience,” said Pomponio. She said that she modeled for Mastrangelo for two to three hours, three or four times a week over the course of a couple of months to complete each painting.

The artist and her one-time model have fallen out of touch and, until recently, Pomponio didn’t know the paintings had been seen so widely.

“It’s definitely very special and I’m so happy for her,” Pomponio said of her friend’s success. Pomponio plans to buy “Alex in Profile” from Mastrangelo.

“It’ll be a good story to tell when I’m old and gray,” Pomponio said.

In 2016, Mastrangelo received an award at the MEAM for a three-paneled work, titled, "Know Not Thy Pending Fate."

Mastrangelo said she wanted to be an artist since she was a child. In elementary school, Mastrangelo went on a field trip to the Norman Rockwell Museum in Stockbridge and said she was “transported and so in awe of the artwork.” While all the other children were running around she was “standing there in silence.”

Mastrangelo went to college for art at James Madison University in Virginia but said she didn’t learn the skills there that she needed. The art they focused on there was more about expression, instead of technique, she said.

On the last day of a study-abroad trip to Florence in Mastrangelo’s junior year, she saw a poster that advertised an atelier, or private workshop, that specialized in the style of art she wanted to create.  Mastrangelo said it felt like fate that she was meant to see the poster. After graduation, she submitted her application to the Angel Academy of Art in Florence.

At the atelier, she said, she learned under a maestro who taught her how to paint realistic portraits and how to make art that would last hundreds of years. All of the work she did there was with live models, the way it was done during the Renaissance.

Mastrangelo moved back to Wilbraham from Italy in 2009 and worked at her studio in Indian Orchard Mills. Since 2016, she spends summers and the holidays in Wilbraham with her husband and the rest of the time they live in Jacksonville, Fla., where her husband, an illustrator, is a professor.

Mastrangelo has taught many workshops and classes in the area, though she now teaches at Wethersfield Academy of the Arts, which is south of Hartford, and at the Boston Academy of Realist Art.

Mastrangelo said realism is very learnable and teachable. She dismisses the idea that the ability to paint is based on talent. She said it’s more about a skill set that you can learn. She admitted it may take some people longer than others.

“I don't know that I'd call it talent. I call it persistence,” said Mastrangelo.

Mastrangelo said being a realist painter can be really hard and it's not what people envision.

“You’re not painting all day, sipping wine,” she laughed. She said some days are horrible and nothing works the way she thinks it will but sometimes, “you get into a groove.”

There is a lot of preparation for her work. There has to be a model or a photo session. She said you have to ask yourself questions before you could even begin like, “who is the model?” and “what are you trying to say?” She often begins with sketches or works in Photoshop before painting.

“There's not much that’s spontaneous in realism,” Mastrangelo said, however, “I enjoy the challenge. I love spending time with the colors.”

Mastrangelo has done hundreds of paintings in her career but each one is a slow process taking weeks or even months.

“I love to paint portraits and figures,” Mastrangelo said. “I feel like I can send a message or narrative that people can relate to.”

While Mastrangelo tries to tell a story with her paintings, each one captures a moment in time. This is what she calls the “endless struggle.”

“With painting, you only have one shot," Mastrangelo said. One way to tell a story, she said, is to fill the painting with as many symbolic aspects as possible. She prefers a simpler approach, using the environment, pose, and facial expression of a portrait to tell stories. She says her paintings are quiet for a reason.

“Paintings are about pausing and appreciating beauty," Mastrangelo said.

Mastrangelo said her time in Florence influenced her work and her focus on profiles, which is similar to Renaissance paintings.

“When you live in a medieval city that flourished through the Renaissance and maintains a close relationship to their past, it inevitably influences you as an artist. I think that is especially evident with these portraits – the elegant poses, simplicity in composition, the muted colors,” Mastrangelo said of her paintings of Pomponio.

Mastrangelo has recently been selling a lot of paintings she  does and she has a lot of patrons in Wilbraham. While teaching used to be her main source of income, her art now exceeds the income from teaching. Prices for her paintings range from $400 to $40,000.

Looking forward, Mastrangelo wants to expand the galleries around the world in which her work is shown. She is also working on several new paintings. Her work can be seen at christinamastrangelo.com.